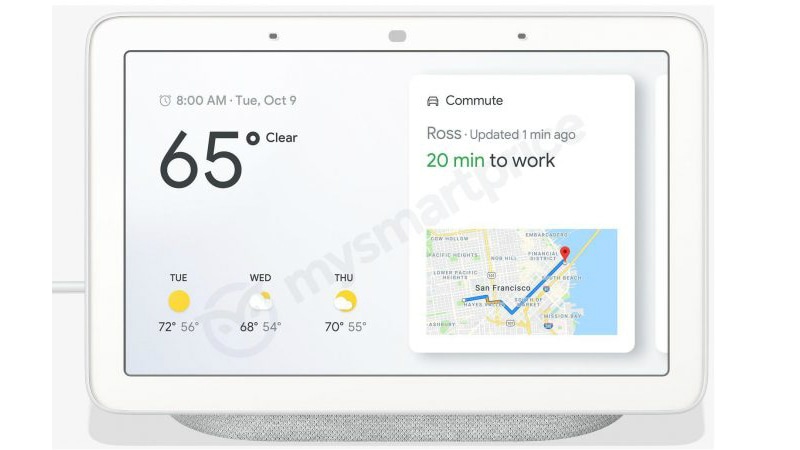 Google Home Hub is expected to sport a 7-inch screen

Google is reportedly looking to expand its Home smart speaker portfolio with the launch of a new device called the Google Home Hub this fall. The device is tipped to sport a display and images of the device have been leaked. A separate report claims that the Google Home Hub will be priced very aggressively at $149 (roughly Rs. 10,800). The Google Home Hub is expected to compete with the Amazon Echo Show which also sports a display, but is priced at $230 (roughly Rs. 16,600). Google's device is expected to launch at the October 9 event alongside the Pixel 3 devices.

A report by MySmartPrice contains several leaked images of the Google Home Hub and screenshots of product specifications revealing key design and specifications details. It is seen sporting a 7-inch display with touchscreen capabilities, and a reasonably large speaker. The report states that the tablet-shaped LCD display won't run on Android, but it will instead be driven by a scaled-down Google Assistant interface. This would be similar to Google's Smart Displays, which also run a special interface of Google Assistant - another version was also leaked for the 'Pixel Stand' dock leaked earlier this month. The Home Hub will be controlled by voice, like all the other products in the family, alongside few controls that can also be accessed by the display screen. The screen will show essential information like weather, daily commute and schedule details, and the time. Behind the screen is the speaker with a mute toggle as well, and the Hub sports the same Chalk White colour as other Google speakers. The report states that there will also be a Charcoal variant, but images of that haven't surfaced yet.

The Google Home Hub can pair with compatible home appliances such as lights, TVs, home cameras, and more. It can access Google Photos via voice commands, and the Live Albums feature allows users to see these photos in a slide-show format. The screenshots reveal that Google has partnered with 400 brands to offer compatibility with more than 5,000 smart devices. It will support 2.4GHz and 5GHz Wi-Fi, Bluetooth, and will weigh 480 grams. Sensors on board are reported to include ambient light and colour sensors.

If the pricing leak is true, the Google Home Hub will be cheaper than the Lenovo Smart Display and JBL Link View which cost $200 (roughly Rs. 14,500) and $250 (roughly Rs. 18,100) respectively. We expect to hear more about the smart speaker at the October 9 event, and until then take all the rumours with a pinch of salt.