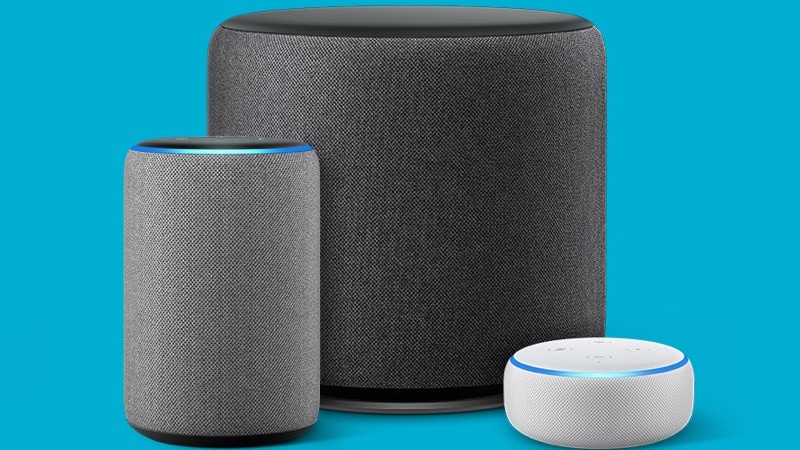 Amazon Echo Plus (left), Echo Sub (centre), and Echo Dot are up for pre-orders in India

Amazon has announced five new Echo products for India at its Alexa-focused event in Seattle. Three of these — Echo Dot, Echo Plus, and Echo Sub — are already up for pre-orders on the Amazon India website, while two others — Echo Show and Echo Input — are coming to India early next year. Three other Echo products — Echo Auto, Echo Link, Echo Link Amp — were also launched but they aren't coming to India just yet.

The Echo Dot (3rd generation) has a new fabric finish, and is priced at Rs. 4,499. Amazon says the speaker delivers better audio quality compared to its predecessor. Since the price remains unchanged, those who want an Echo Dot can now order the newer generation product without shelling out more. The Echo Dot is available in three colours — Charcoal, Heather Gray, and Sandstone. As with the previous generation Echo Dot, the new speaker can be connected to other speaker systems via Bluetooth or a 3.5mm cable. Echo Dot can now also pair with other Echo speakers to create stereo sound. You can pre-order the Echo Dot now and it will go on sale next month.

Everything Amazon Announced at Its Alexa-Focused Event in Seattle

The new Echo Plus costs Rs. 14,999, which is the same as the previous generation device. This product is now powered by Dolby with a 3-inch (6.35 cm) neodymium woofer, a 0.8” (2 cm) tweeter, and is louder than before. Amazon says the bass is stronger and the sound is clearer on the Echo Plus. Alexa, the smart voice assistant that powers all Echo devices, will also allow you to adjust bass, treble, and midrange via voice commands.

During the launch, Amazon demoed the Echo Sub with a pair of Echo Plus speakers and the volume did get loud enough for a room with around 50-100 people. The Echo Sub is is up for pre-order for Rs. 12,999 and will ship in November. If you buy this with two compatible speakers, you can save up to 25 percent.

Two other devices announced at the Amazon event in Seattle are coming to India — Echo Show and Echo Input. The Echo Input allows you to turn any speaker into an Alexa-powered smart speaker. The Echo Input does not have a speaker but it adds a microphone that hooks up your existing speaker with Alexa. It's the cheapest in the line of Echo devices focused on Alexa and will be coming to India early next year.

Echo Show is a device with a 10-inch screen that has a decent speaker, a front camera, and is connected to Alexa. Think of it as an Echo speaker with a display. The Echo Show will also be coming to India next year, but pricing for the Input and the Show have not been announced yet.

The Echo Auto, Echo Link, and Echo Link Amp are three interesting products that aren't coming to India at this point. Echo Auto allows you to bring Alexa to your car. Amazon says it has an eight-microphone array to be able to listen to your commands while you are driving. The big challenge with this product was to capture your commands even when there are distracting sounds in the background such as engine noise, road noise, traffic noise, etc. This is available at an invite-only price of $24.99 right now and Amazon says the price will rise to $49.99 once the test period is over.

The Echo Link ($199.99) and Echo Link Amp ($299.99) are geared towards audiophiles. Echo Link Amp has a 60W 2-channel amplifier, with left-right speaker binding post outputs to support wiring into passive and non-powered speakers, Amazon says. The device won't go on sale until it obtains FCC approval in the US, according to the Amazon listing page. Echo Link, which is also awaiting FCC approval, allows you to stream hi-fi audio via your existing setup.

Disclosure: Amazon sponsored this correspondent's flights and hotel for the event in Seattle.

Will Nintendo Switch Online Save Retro Gaming?
Spider-Man PS4 Said to Be a Bigger Opening Weekend Hit Than Spider-Man: Homecoming