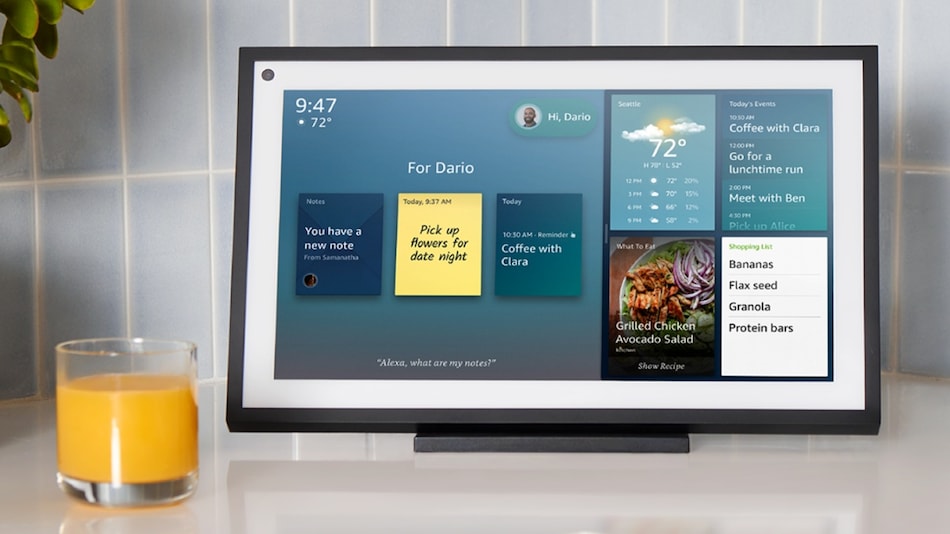 Amazon at its Devices and Services event on Tuesday introduced the Echo Show 15 as its biggest-ever smart screen in the Echo Show portfolio. The new Echo Show model comes with a full-HD display that can be mounted on a wall as a digital frame or placed on a counter. It can also be positioned horizontally or vertically — depending on your preference. In addition to the Echo Show 15, Amazon unveiled the Amazon Glow as a new device specifically meant for kids to let them make video calls and interact with their loved ones using a projected space.

Amazon Echo Show 15 price has been set at $249.99 (roughly Rs. 18,600). The device will be available for purchase later this year. Customers can sign up starting today to be emailed when pre-orders begin. India price and availability are yet to be announced.

In contrast, the Amazon Glow comes with a price tag of $299.99 (roughly Rs. 22,300), though it is initially available at an introductory price of $249.99 (roughly Rs. 18,600) through an invite-only programme in the US, with shipments starting in the coming weeks. Customers can join the list of early participants through a dedicated product listing page on Amazon. Details about the global availability and pricing of the Amazon Glow have not yet been revealed.

The Amazon Echo Show 15 comes with a 15.6-inch display that has a full-HD (1,920x1,080 pixels) resolution and is paired with two 1.6-inch stereo speakers. The display also has a hole-punch design to include a 5-megapixel camera sensor. The prime purpose of the Echo Show 15 is essentially to reach the places at your home where you don't want to keep any of the existing Echo devices. So, it can be mounted on a wall in your living room or placed on a large counter in your kitchen or bedroom.

Once mounted or placed, the Echo Show 15 lets you access Alexa widgets such as family calendar or your to-do list at a glance. You can also buy products directly from Amazon through the Echo Show 15 — instead of taking out your phone or switching on your laptop. Similarly, the device can help with recipe recommendations from platforms including Allrecipes, Tasty, and Epicurious. The home screen on the Echo Show 15 is also customisable, which means that you can add or remove widgets and other on-screen items as per your preference or requirement.

Alongside widgets, the Echo Show 15 provides controls for a list of compatible smart home devices. The display also lets you stream movies and TV shows from a variety of platforms, including Amazon Prime Video and Netflix. Amazon is also adding Sling TV to the list of supported streaming platforms for the Echo Show 15 and other Echo Show devices.

If you don't want dynamic content on the Echo Show 15, you can place your favourite image from Amazon Photos or go with alternating visuals ranging from the preloaded art, nature, seasonal, or travel galleries.

Apart from entertaining you and your guests with pictorial content, the Amazon Echo Show 15 includes the company's Sound Detection feature that helps notify users when the system detects noises such as broken glass or crying baby. There is also the optional Visual ID feature that allows Alexa to recognise you and your family members using facial recognition and provide a personalised experience each time when you access the device. It lets users receive custom greetings, as well as their personal reminders, calendar events, recently played music, or personal notes.

The Visual ID feature can also be used for kids, to let the Echo Show 15 display only age-appropriate content when the young user is recognised by the system. There are, of course, privacy concerns considering Amazon's nature of using user data for a list of business-centric moves.

However, Amazon claims that it has designed the Echo Show 15 with “privacy in mind” and has provided features including a built-in shutter to cover the camera and the ability to view and delete your voice recordings. Visual ID is also available as an opt-in feature, and you can delete your facial profile at any time through the on-device settings or by using the Alexa app. Additionally, kids cannot create a Visual ID on their own, but their parent or guardian can. Families may set-up a visual ID for each child that is linked to an Amazon Kids profile.

Amazon has also provided video calling support to let you virtually connect with your friends and family on the large display. There is a built-in microphone to enable video calls.

Under the hood, the Echo Show 15 has an all-new, quad-core Amazon AZ2 Neural Edge processor that is the successor to the existing AZ1 chip that is powering the Echo Show 10. The new processor is claimed to be 22x more trillions of operations per second (TOPS) than its predecessor. This suggests that you would get better machine learning experiences on the new model.

Connectivity options on the Amazon Echo Show 15 include Wi-Fi 6 and Bluetooth support. There is also support for Advanced Audio Distribution Profile (A2DP) for audio streaming from your mobile device.

The Amazon Glow is a new device by the US company aim at children. It features an 8-inch dedicated display to help kids read e-books or communicate with their parents and family over video calls. This sounds similar to the Echo Show models. However, as a distinctive move, Amazon has this time also included a projector that is capable of enabling a 19.2-inch touch-sensitive projected space for playing games or creating art while communicating over video calls. The company also announced Glow Bits learning kits that will come soon as separate accessories for the Amazon Glow and include physical objects such as shapes and figures to offer a next-generation interactive experience.

Amazon has bundled the Amazon Kids+ service with the Glow to provide access to various books, interactive games, and art activities. Kids will be able to read, play, and draw through this bundle that will be available free for one year. Amazon Kids+ is normally available at $2.99 (roughly Rs. 220) a month.

Parents can participate with kids while they're playing games or drawing an art over video calls to join them in their work by installing the Glow app on their iPad or Android tablet. The app will also be available for Amazon's Fire tablets in the future. It can also be downloaded on smartphones, though that's not going to be the best way to get the interactive experience.

Once joined the conversation, parents will be able to play with their kids various games like Jigsaw featuring SpongeBob SquarePants, Chess, Checkers, and Go Fish, among others. Kids and parents both will also have drawing activities such as Tic-Tac-Toe and Spaceman as well as art packs including Sesame Street to play together. Further, the games and art activities will feature various Disney characters, including Anna and Elsa from Frozen, Woody and Buzz from Toy Story.

It is, however, unclear whether the Glow will continue to offer some features once the bundled Kids+ service expires.

The Amazon Glow also uses built-in infrared sensors to enable scanning of products to turn them into digital stickers or custom jigsaw puzzles. Kids just need to place the object on the flat mat bundled with the device to scan it for future use. The 22-inch mat is also designed to project clear images irrespective of the surface.

On the privacy front, Amazon says that it has included a physical privacy shutter to turn off the camera and disable microphones. There is also the Amazon Parent Dashboard where parents can choose the contacts with whom their kids can communicate over the Amazon Glow.

The Amazon Glow features HD (720p) profile and projector cameras, apart from a 10W 3.3x1.3-inch speaker. Connectivity options include Wi-Fi 802.11ac and Bluetooth v5.0. The device is targeted at kids aged three and above.