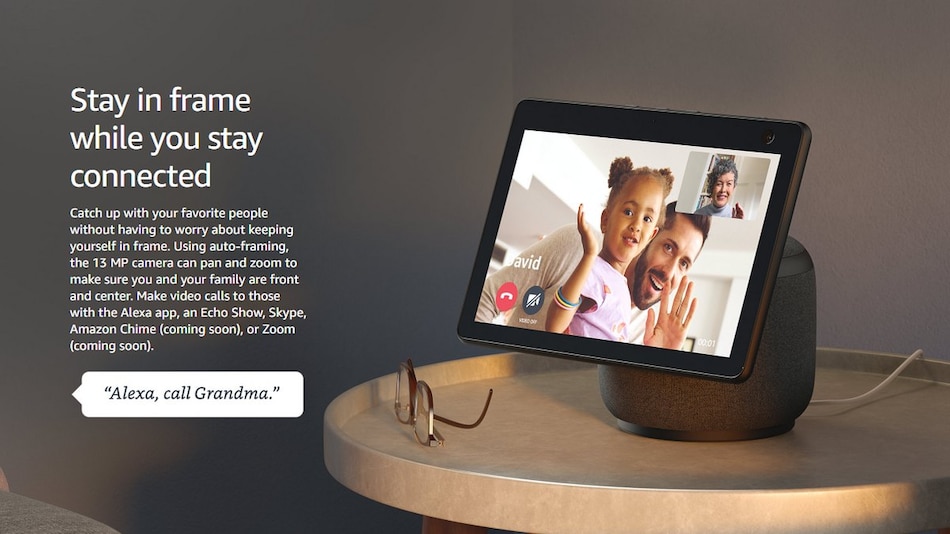 Amazon Echo Show 10 has been introduced as the third generation variant of the Echo Show that was first launched back in 2017. Amazon says it is a “complete re-imagination of Alexa with a screen and has been upgraded in every way.” The Echo Show 10 boats of a motorised base that swivels automatically to keep you in frame, whenever you interact with the device. It is offered in two colour options and comes with a new 13-megapixel camera that uses zoom and pan to keep the user in the centre of the frame. Amazon also announced that Echo Show devices will be getting Netflix support.

The new Echo Show 10 is priced at $249.99 (roughly Rs. 18,400) in the US and will be offered in two colour options – Charcoal and Glacier White. Amazon has not shared an exact sale date for the Echo Show 10 and it is listed on the US website as ‘coming soon'.

As of now, it is unclear when the Echo Show 10 will make its way to the Indian market. The Echo Show 10 was launched alongside the new Echo Dot (4th Gen) that is listed on Amazon India and will go on sale starting October 26.

The Echo Show 10 by Amazon features a 10.1-inch adaptive HD display that moves to face the user. It has a brushless motor system that allows it to rotate without any sound and track the subject. It allows users to interact with Alexa via voice commands. It comes with a 13-megapixel wide-angle camera that keeps you in frame by panning and zooming. Because of the camera and the display, you can make and receive video calls on the Echo Show 10.

The Echo Show 10 is powered by the new AZ1 processor that can process speech faster, making Alexa more responsive. There is also a physical camera shutter that can be closed, that will also turn off its motion. This can also be done by the voice command “Alexa, turn off motion.”

It features dual front-firing tweeters and a woofer that delivers directional sound automatically adapting to your space, as per Amazon. The company has also announced support for Netflix for Echo Show devices. This means users will now be able to stream content from not just Hulu and Prime Video, but also Netflix. An exact date for when this feature will be added has not yet been announced.

Additionally, Echo Show 10 can act as a security camera as well by periodically panning the room and sending Smart Alerts if it detects someone. With the Alexa app, you can access the live feed from the Echo Show 10's camera from anywhere. You can remotely zoom and pan as well.