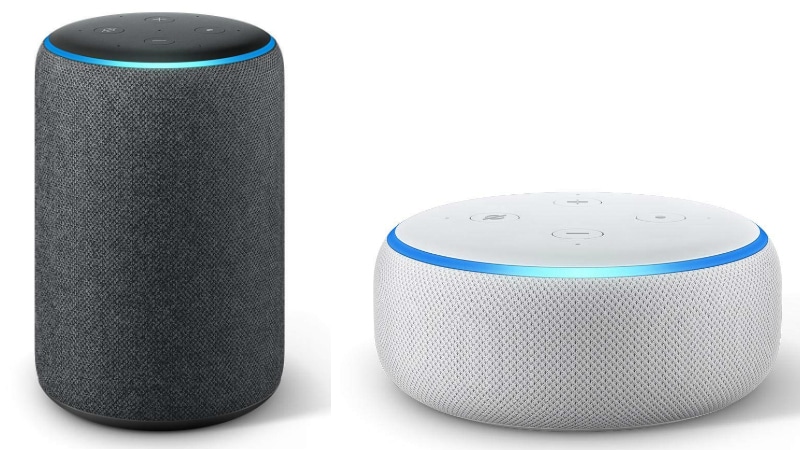 After being launched last month, Amazon has made the Echo Plus and Echo Dot White colour variant available in stock in India. The Echo Dot Grey variant and Echo Sub variants are still listed to be available late October and mid-November respectively. Separately, Amazon has introduced new APIs for developers to support more smart home functionalities into Echo and Alexa-enabled devices. The new Doorbell Event Source, Alexa.RTCSessionController and Motion Sensor APIs will enable users to connect their doorbell press and camera motion sensors to Alexa. This will allow Alexa to shout out when someone is at the door, and turn on voice announcements for the smart home camera, and even allow it detect motion in the house.

Last month, Amazon launched a slew Echo products at its Alexa event, and made a few of them available in India as well. Most of the devices were up for pre-order, and still are, but the Echo Plus and Echo Dot White variant is finally in stock on Amazon. In India, the third-gen Echo Dot (Grey and Black) is listed to be in stock from October 25, and the Echo Sub is said to arrive on November 14. The Echo Plus and the third-gen Echo Dot (White) are in stock, with delivery promised by tomorrow for Prime members. The Echo Dot (3rd generation) is priced at Rs. 4,499, the Echo Plus is priced at Rs. 14,999, and the Echo Sub is priced at Rs. 12,999. As part of the Amazon Great Indian Festival offers, the e-commerce giant is offering the Echo Dot at a discounted rate of Rs. 2,999 and the Echo Plus at a discounted rate of Rs. 11,999. Echo Show and Echo Input were also announced, and are expected to come to India soon, while the Echo Auto, Echo Link, and Echo Link Amp are three interesting products that aren't coming to India at this point.

How Amazon Plans to Personalise Its Echo Smart Devices for India

In the US as well, the Echo Plus and the Echo Dot are in stock and other devices are back-ordered, with the Sub shipping in late October, and the Echo Show shipping from November 6. Amazon is allowing users to buy the devices, but delivery is promised at a later date. The US availability was first spotted by Android Police.

Separately, Amazon has introduced the new Doorbell Event Source, Motion Sensor, and 2-Way Communication (Alexa.RTCSessionController) APIs to enable Alexa to make voice announcements regarding someone at the door, motion detection in smart home cameras, and build a two-way link between smart display devices like the Echo Show and Echo Spot. These can be used in the US only currently, and other region support will be added soon. "Customers can also set up smart home automations using doorbell or motion events like turning on lights, playing music or custom announcements using Routines within the Alexa app," Amazon noted on its developer blog.

Smart devices from Ring and August have already implemented Doorbell and Motion Sensor APIs, and the 2-Way communication API has been implemented by Ring, while August is looking to implement it soon. For the 2-Way Communication API, Amazon notes that "it currently supports only WebRTC compliant cameras or 3Ps who use a WebRTC bridge to connect to Alexa. Alexa voice commands are currently only available for full duplex cameras. Half duplex cameras will have push to talk capabilities on the Echo Show or Echo Spot."