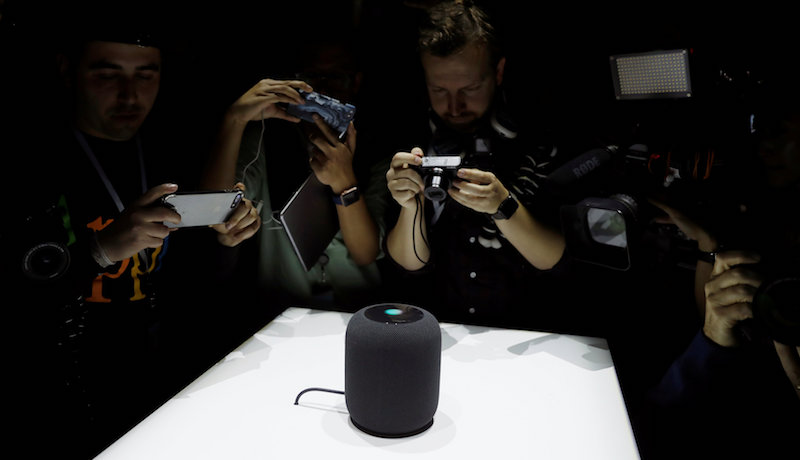 Hey Siri, what did Apple announce today? The firm is jumping into a whole new product category - the home hub.

Chief executive Tim Cook on Monday introduced Apple's voice-enabled smart speaker, the HomePod, at the company's annual developers conference, finally entering the home hub fray. The announcement was the most notable from the event, which packed in a lot of hardware and software updates.

Apple's new product is a competitor to Google's Home and Amazon's Echo line of smart speakers, which have taken an early lead in the young product category. (Amazon chief executive Jeffrey Bezos is the owner of The Washington Post.)

Why Apple Is Struggling to Become an Artificial Intelligence Powerhouse

Just like its competitors, the HomePod will be able to answer basic questions such as what the weather will be like or how bad traffic is. But the real selling point, as far as Apple is concerned, is the HomePod's sound quality.

The $349 (roughly Rs. 22,500) HomePod looks to provide an alternative to high-end speakers from competitors such as Bose and Sonos as well as the cheaper home hubs from its fellow tech giants. In that way, Apple is sticking to its normal playbook and focusing on consumers willing to shell out more cash - a strategy that can mean fewer sales but generally leads to greater profits.

Onstage, Apple's worldwide head of marketing, Phil Schiller, described how the speaker analyzes the song it's playing and adjusts its output. For example, with a vocal-heavy track, it may emphasize middle tones, while a song with a driving beat will get more emphasis on the bass. The idea is that consumers will never have to mess with settings to optimize their speaker output.

HomePod owners also won't have to tinker with the speaker to fit its position in a room, Apple said. The speaker is able to detect the surfaces around it and will beam sound to the right spot. If you link multiple speakers, they will adjust to one another's positions.

The company, however, did not show off the speaker's Siri-enabled features Monday, saying it would release more information at a later date.

Some analysts said they don't expect the HomePod to catch on as quickly as its cheaper competitors. "Apple will carve out some sales in the smart speaker market with HomePod but will continue to stand far behind Amazon and Google by the end of 2017," Ronan de Renesse, of the analysis firm Ovum, said in an email.

Apple, unlike Amazon or Google, is more interested in selling hardware than in using its devices to attract users for its services.

The voice-activated-speaker market is projected to reach $2.1 billion by 2020, according to an October report from the analysis firm Gartner. By 2020, 3.3 percent of global households are expected to have one.

Another expected update came with the company's MacBook, Mac and iPad Pro lines. The new iPad Pro has a larger screen than its predecessors - 10.5 inches instead of the standard 9.7 inches. There is also a 12.9-inch model; both come with a slew of new productivity features that make them more appealing as laptop replacements. Apple last updated the iPad Pro last fall, when it introduced the smaller model, but the iPad Pro hasn't had a significant performance update since its 2015 release.

The company rounded out its computer announcements with devices focused more on the professional market. They include a faster MacBook and MacBook Pro and a new 13-inch MacBook Pro for $1,300. Three iMac models got a processor bump. The company also released a new computer, the iMac Pro. The high-end desktop will cost $5,000 and will ship in December.

The HomePod also will go on sale in December.