It's Shaping Up to Be a Stellar Year for Space Flight 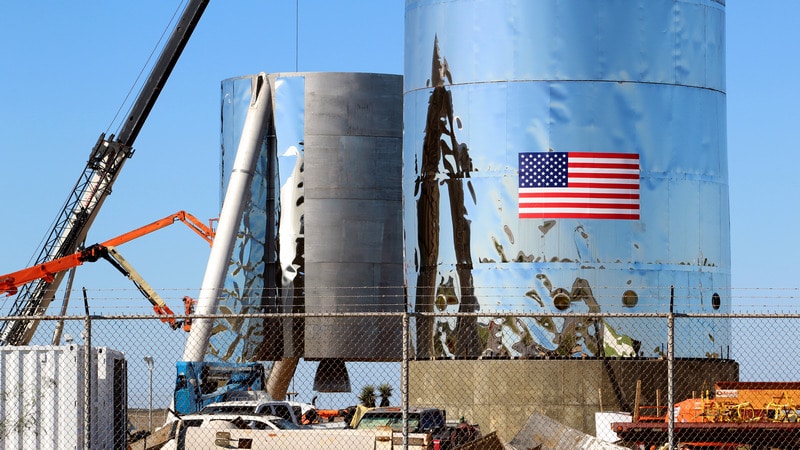 Elon Musk is prone to tweeting out artistic renderings of the rockets and spacecraft he intends to build, offering his followers a glimpse of the future he imagines for humanity on other planets. So when he recently posted a photo of a launchpad walkway leading out to his rocket and spacecraft, Musk felt compelled to clarify in a follow-up tweet.

"Sorry, to be clear, this pic is real," he wrote. "Nothing rendered."

Though the prospect of the return of human spaceflight from United States soil has at times seemed like a mirage, NASA's astronauts could this year return to space from the Florida Space Coast for the first time since the space shuttle was retired more than seven years ago. If successful, it would punctuate a year that government and industry officials believe could mark a turning point in the United States space program, which could see all sorts of new milestones as NASA celebrates the 50th anniversary of the lunar landing.

Boeing is also working to develop a spacecraft it hopes would ferry NASA's astronauts to the International Space Station by the end of 2019, meaning there would be not one but two American spacecraft capable of flying astronauts to orbit. After successfully scratching what many consider the edge of space last month, Virgin Galactic is planning to make space tourism a reality in 2019. Blue Origin also hopes to fly its first test mission to space this year. And small rocket companies hope to start launching to orbit on a more regular basis.

NASA is pushing for a return to the moon, and the White House has made space a national priority again, reconstituting the National Space Council, led by Vice President Mike Pence.

"We've been working to get back to the Moon and go on to Mars for years, creating a diversified suborbital and low-Earth orbit economy, and searching for the political, technical, and monetary will to make it a reality," said Jared Stout, the former deputy executive secretary of the Space Council who is now a policy adviser at Venable, a law firm. "In 2019, we are at the precipice of realizing the dreams of decades of planning and energy poured into the space enterprise."

When it comes to space, there are always setbacks and delays. Getting off the surface of the Earth is difficult and dangerous. It requires enormous amounts of energy, and nothing ever seems to go according to schedule.

Virgin Galactic had a fatal accident in 2014. And Musk recently tweeted that the uncrewed first flight of the spacecraft designed to carry humans "will be extremely intense."

"Early flights are especially dangerous, as there's a lot of new hardware."

- Commercial crew: In 2014, when NASA awarded Boeing and SpaceX contracts to fly its astronauts to the space station, then-NASA administrator Charles Bolden said it would set "the stage for what promises to be the most ambitious and exciting chapter in the history of NASA and human space flight."

He vowed the first flights would take place by 2017, ending NASA's reliance on Russia to fly its astronauts to space.

The program has suffered setbacks, including a lack of congressional funding. Now both Boeing and SpaceX are scheduled to fly test flights with humans this year, though many think there will be continued delays to the program, potentially pushing at least one of the human flights to next year.

SpaceX was expected to fly a test mission without humans on board this month, but NASA recently announced that would be delayed to February.

In the meantime, NASA is conducting a safety review of the companies, spurred by Musk smoking marijuana on a podcast.

- SpaceX: After coming off a momentous 2018, in which it flew a record 21 times, the company hopes to continue its cadence this year. SpaceX has a full manifest of commercial satellites to launch, in addition to the national security payloads it lifts for the Pentagon and the cargo it carries to the space station for NASA.

It is planning two more flights of the Falcon Heavy rocket, the most powerful in operation today. Last year, it flew for the first time, delivering a Tesla Roadster on a trip toward Mars.

After mastering the art of recovering the first stages of rockets, which had traditionally been tossed into the ocean, SpaceX is working on catching another part of its rockets: the nose cone or fairing. In 2017, Musk said they cost about $6 million (roughly Rs. 42 crores) each.

"At one point we're like debating, 'Should we try to recover it or not?' " he said at a news conference. "It's like, 'Guys, imagine you had $6 million in cash in a palette flying through the air, and it's going to smash into the ocean. Would you try to recover that?' Yes. Yes, you would."

The company uses a boat with a giant net affixed to it, forming a giant catcher's mitt. During a recent test it got pretty close.

- Space tourism: Last month, Virgin Galactic hit a long elusive goal when two pilots flew its spaceplane to more than 50 miles high just barely passing what many consider the edge of space. The pilots, C.J. Sturckow, a former NASA astronaut who flew on the space shuttle four times, and Mark "Forger" Stucky, a former Air Force test pilot who flew the SR-71 Blackbird, are expected to receive astronaut wings at a ceremony in Washington from the Federal Aviation Administration in the near future.

Richard Branson, Virgin's founder, has said he hopes to fly sometime in 2019, and then send ticket holders sometime thereafter from Spaceport America, the futuristic facility it plans to operate out of in New Mexico.

If all goes according to plan, as many as six passengers would reach the edge of space, be able to unbuckle, and float around the cabin for a few minutes, while taking in views of the Earth from above.

Blue Origin, the space company founded by Jeff Bezos, also plans a key milestone this year: its first flights past the edge of space with test pilots. (Bezos also owns The Washington Post.) It has said it would like to fly paying customers this year, as well.

Those passengers would "marvel in weightless freedom and lose yourself in breathtaking views through the largest windows in spaceflight history."

The company hasn't named a price or nailed down any definitive dates, and it only flew its New Shepard rocket twice last year.

But many think the first flight will slip again, and a recent government watchdog recently painted a poor picture of the rocket's development. In a scathing report, Nasa's Inspector General found that the cost of the program could balloon to as much as $9 billion.

Despite the criticism, NASA Administrator has stood by the program, saying it is key for the agency to reach the moon.

- Small launchers and satellites: The year 2019 could, however, go down as the year of the small-launch vehicle. While SpaceX and others are focused on building massive and powerful rockets, some companies have been developing much smaller launchers.

They are designed to meet the needs of a revolution in satellite technology that has shrunk down their size to that of a shoe box in some cases. Small satellites don't need huge, expensive rockets, hence the boom of companies racing to build small launchers.

Rocket Lab, a company based in New Zealand and California, is leading the way. It launched three times last year, and CEO Peter Beck said in an email that "2019 will be even bigger." The company is planning to launch on a monthly basis and eventually start operations from the Wallops Flight Facility on Virginia's Eastern Shore.

Virgin Orbit, another of Branson's companies, plans its first flight to orbit this year.

And Vector is also planning its first launch to orbit this year. If that's successful, it hopes to fly a handful more times. The small satellite industry is at a point where the personal computer was "in 1987, where it's about to explode," said Jim Cantrell, the company's co-founder and CEO.

OneWeb agrees. The company, which is backed by Virgin, Airbus, Qualcomm and others, plans to launch a constellation of satellites into low Earth orbit that would beam the Internet down to remote parts of the world. It plans to launch its first patch of satellites next month on a rocket made by Arianespace, the French rocket manufacturer.

SpaceX is also getting into the small satellite business. It is raising $500 million to put up a constellation of satellites called Starlink that could beam the Internet across the globe.

Last year, it won approval from the Federal Communications Commission to put up as many as 12,000 satellites. But others have warned that putting so many spacecraft into orbit would face immense technical and regulatory challenges.