Black Hole Image Is Beautiful and Profound, but It Doesn't Tell Us Much 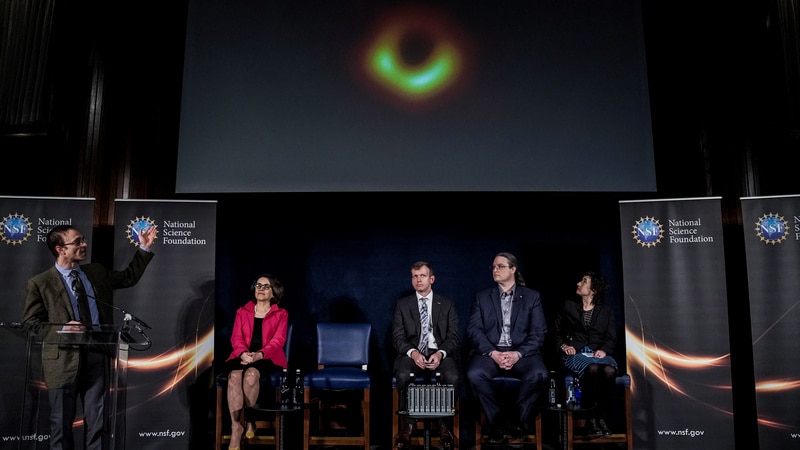 Shepherd Doeleman shows the first image of a black hole during the press conference in Washington, US

The first image of a black hole was just released, and it's being celebrated around the world as a triumph of science and more evidence of the great march of human progress. In everything being said, there are overtones of the moon landing: "One small step for man, one giant leap for mankind."

All of which makes sense. It's a significant event. The brilliant scientific minds who found a way to obtain the image deserve our congratulations.

Only half a century ago, black holes were considered, in the words of Italian physicist Carlo Rovelli, "the barely credible predictions of an esoteric theory."

Now they are established facts - if not exactly observable, then able to be inferred by evidence emerging from their interaction with other materials.

But hold on. Before we get too excited, look again at the image.

It's beautiful. It's profound. But it's not very detailed, is it?

What we're seeing - fittingly, given what we know about black holes - is not so much a presence as an absence. A dark space defined by an asymmetrical outline, an "emission ring."

So perhaps there may be less cause for celebration than for humility, because at a fundamental level, the image is telling us more about what we still don't know than what we do know.

A lot of great images are like that. Think of a painting by Rothko, a portrait by Rembrandt or a photograph by Robert Frank. Their greatness, it seems, is largely a product of how many unknowns congeal around them, as well as the intensity, specificity and profundity of those unknowns.

By that metric, this is indeed a great image.

We know that black holes are created when a large star has burned up all of its hydrogen. What remains, as Rovelli explained, "is no longer supported by the heat of the combustion and collapses under its own weight, to a point where it bends space to such a degree that it plummets into an actual hole."

How would you show such a thing? That has long been the challenge.

It's worth noting that this image isn't really a photograph. It is information recovered and transposed into visual data with the help of various "calibration and imaging schemes."

The image shows a black hole in the center of a giant elliptical galaxy known as M87. The scientists who produced it were working from the premise that, "when surrounded by a transparent emission region, black holes are expected to reveal a dark shadow caused by gravitational light bending and photo capture at the event horizon."

It's heady stuff. And like so much in astrophysics, it gets us wondering as much about metaphysics as physics.

Explaining why he believed agnosticism was a more rational position than atheism, the author Martin Amis said: "Since we know so very little about the universe, it's a bit previous to say that there's no higher intelligence. Since the universe is much cleverer than we are and cosmology is almost going backward, we're just finding out more about our ignorance."

Is that true? Is cosmology really going backward?

Today, it may look like it's going forward. But even just a cursory look into the field of astrophysics can make it seem that below each new forward step is an abyss of unknowns.

We yearn, as humans, to increase our knowledge, and a day like today - an image like this one - briefly satisfies that yearning. It deepens our understanding of reality. But it may be better understood as what Rovelli called "a glimpse of reality, a little less blurred than our blurred and banal everyday view of it."

But still - just look back at the image - it's very blurred.

Even our greatest scientists - who are figuring out extraordinary things about time, the cosmos and the almost implausible strangeness of space - exist, as Rovelli wrote, "at the edge of what we know, in contact with the ocean of the unknown."

But it is precisely here, he concluded, that the mystery and beauty of the world shines forth.