Younger Version of Our Solar System Found Around Nearby Star 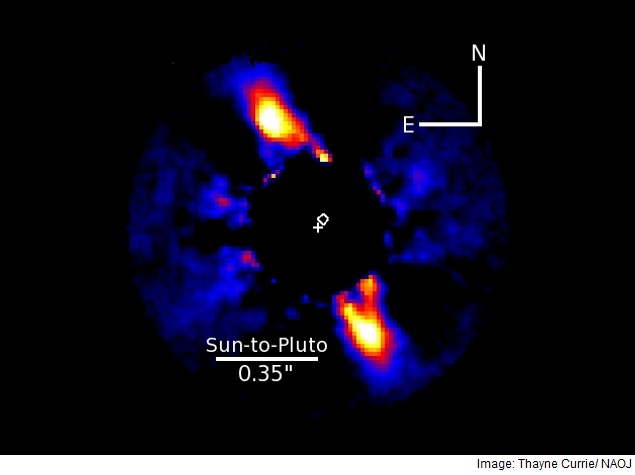 An international team has discovered a young planetary system that shares remarkable similarities to our own early solar system.

The images reveal a ring-like disk of debris surrounding a Sun-like star, in a birth environment similar to our Sun.

The disk appears to be sculpted by at least one unseen solar system-like planet, is roughly the same size as our solar system's Kuiper Belt and may contain dust and icy particles.

This work provides a valuable key to understanding the early formation of the Sun and planets.

"The discovery of the bright ring of orbiting the star HD 115600 changes everything. It is kind of like looking at outer solar system when it was a toddler," said lead astronomer Thayne Currie from the Subaru Telescope in Hawaii.

Remarkably, the ring is almost exactly the same distance from its host star as the Kuiper Belt is from the Sun and it receives about the same amount of light.

The star itself is just slightly more massive than the Sun. Its birth cloud is very similar to the nebula in which the Sun formed some 4.5 billion years ago.

It is also home to thousands of remnants from the earliest stages of icy planet formation, and thus provides a key to understanding the early solar system.

The results are very promising.

"The study of cold, Kuiper belt-like debris rings around nearby young Sun-like stars provides the best picture of what our own early, outer solar system might have been like," the authors said.

The paper is set for publication in the Astrophysical Journal Letters.