Recovered from a 2014 accident and subsequent redesigns, the company is moving into its New Mexico Spaceport. 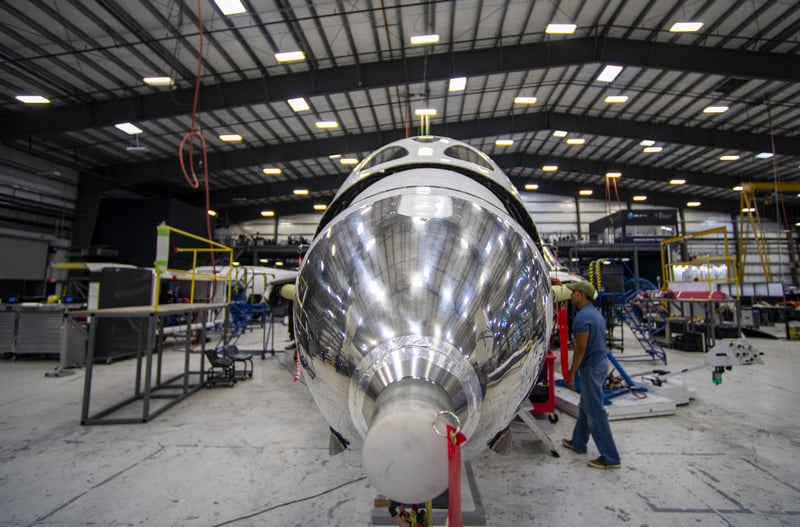 Virgin Galactic already has about 700 customers who are each paying roughly Rs. 1.7 crores

Almost 15 years ago, Virgin Group founder Richard Branson made a bet on launching tourists into space from the scrublands of southern New Mexico. Now, he's about to move the headquarters of his space venture to the so-called "Land of Enchantment." Virgin Galactic's move into its permanent headquarters at Spaceport America, north of Las Cruces, signifies the acceleration of his effort to build a viable space tourism business. It also marks a recovery from the 2014 mishap that claimed the life of a test pilot.

This summer, the company will relocate about 100 employees from California as it prepares to wind down its test flight program, Virgin Galactic announced Friday during a ceremony with Gov. Michelle Lujan Grisham in Santa Fe.

Branson has said he will be among the first passengers; Whitesides said he and his wife, Loretta, will probably fly in 2020. Blue Origin, the space effort by Amazon.com founder Jeff Bezos, also plans its first commercial flights for this year.

Virgin Galactic's flights from Spaceport America involve a carrier aircraft that takes the spacecraft to an altitude of about 45,000 feet, where it drops and then fires its rocket to climb into suborbital space. Passengers, who first spend about two days at Virgin Galactic's campus preparing for the trip, will experience about 10 minutes of weightlessness before descending for a landing at the spaceport.

Virgin Galactic already has about 700 customers who are each paying $250,000 (roughly Rs. 1.7 crores) for a 90-minute flight. Branson's space effort had suffered delays due to major engineering changes that were required after the 2014 crash of its VSS Enterprise, which killed pilot Michael Alsbury.

Virgin Galactic plans a few additional test flights from New Mexico in late summer or early fall, with additional employees along for the ride as the company finalizes its operating procedures.

"We want to make sure we have a very choreographed service and offering planned out," Whitesides said. "We want to give the pilots a few times to just fly it."

Of the work remaining to be done, Whitesides said "the No. 1 thing is we need to finish installation of the commercial cabin. Our interiors team is sort of going through that process to create the world-class Virgin cabin everyone expects-and that's going to entail a lot of work."

Beyond the cabin work, Virgin Galactic is also ferrying its ground and training equipment from California. "We've moved from the realm of space-age physics to logistics," he said.The company is also exploring small aircraft to begin frequent employee shuttle flights between Mojave-where Virgin subsidiary The Spaceship Co. employs several hundred people-and Spaceport America as a way to avoid the time-inefficiencies of flying commercial. El Paso, Texas, the nearest major airport, is about a 90-minute drive south of Spaceport America.