Uttarakhand Disaster Caused Due to Rock and Ice Avalanche as per Satellite Data: ESA

A team of 53 scientists and experts re-constructed the event and investigated the scope and impact of the disaster. 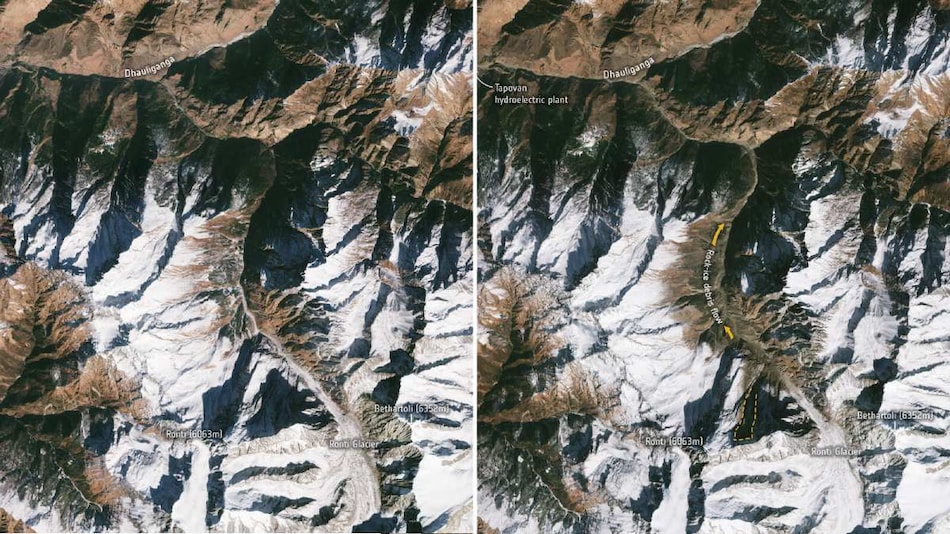 A large mass of rock and ice avalanche caused the Chamoli disaster in February 2021 in which over 200 people lost their lives in Uttarakhand, a new study that used satellite evidence has confirmed. The avalanche triggered a mud and debris flood, causing massive destruction along its route. On February 7, 2021, a large mass of rock and ice from the Himalayan mountain fell into the valley below. This was followed by a huge flow of debris down the Ronti Gad, Rishiganga, and Dhauliganga river valleys, leaving a trail of destruction along the way and destroying two major hydropower facilities that were under construction.

In an Instagram post, the European Space Agency (ESA) said that following the unfortunate incident, the International Charter 'Space and Major Disasters,' a service that provides satellite images in response to natural and human-made emergencies, was activated.

Scientists analysed numerous images acquired before and after the incident, coupled with freely available images from Landsat and the Copernicus Sentinel-2 missions, to figure out the details including total volume, elevation differences, and travel distances of the avalanche.

“This analysis allowed scientists to exclude that a glacier lake outburst flood had been the cause of the disaster. Instead, the study provides satellite evidence that the disaster was caused by a large mass of ice and rock dislodged from the slopes of Ronti Peak, starting as a giant landslide that transformed into a mud and debris flow causing destruction along its path,” the ESA wrote in its caption.

Following the disaster, a team of 53 scientists and experts came together online and re-constructed the event, and investigated the scope and impact of the flood caused by the landslide. The study, published in the journal Science, also evaluated seismic records and eye-witness videos to determine the timing of the event and produce computer models of the flow.

In an ESA blog post, Andreas Kääb — a researcher from the University of Oslo — attributed the devastating impact of the mud and debris flood wave to rock in the avalanche converting glacier ice into water. He said, “The calculated 80 percent rock in the avalanche completely converted the 20 percent glacier ice into water over the 3200-metre elevation difference from Ronti Peak to the Tapovan hydropower plant.”

Dan Shugar, lead author and associate professor in the Department of Geoscience at the University of Calgary, said that the rapid increase in the number of satellites orbiting the Earth allowed their team to understand what had happened. “We now have access to satellites that image every part of Earth every day — sometimes even multiple times per day — and this has really revolutionised how we do this sort of science,” Shugar said.

The results of the study have also been shared with Indian agencies to help plan and support emergency assistance to the local teams.