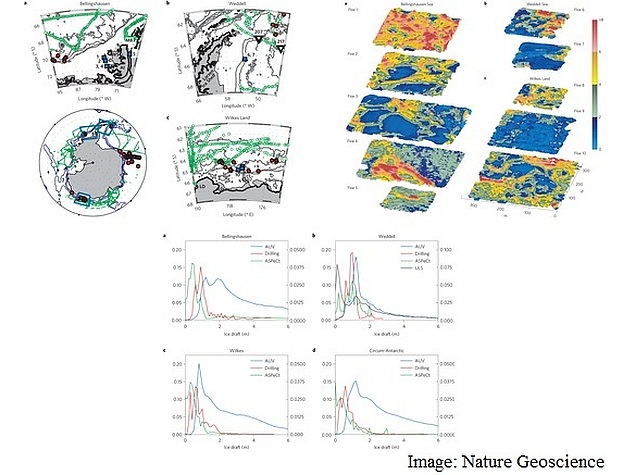 Measuring the thickness of Antarctic sea ice, an important gauge of environmental conditions in this remote polar region in a time of global climate change, has proven to be a tricky task. But an underwater robot is providing a nice solution.

Satellite measurements can be skewed by surface snow, and some ice floes are simply too difficult to reach by ship, even icebreakers, to make direct measurements by drilling into them.

Scientists on Monday unveiled the first detailed, high-resolution 3D maps of Antarctic sea ice, based on measurements of the underside of ice floes by a remote-controlled submarine's upward-looking sonar.

The measurements, covering an area of about 5.4 million square feet (500,000 square metres), were made in 2010 and 2012 using a so-called Autonomous Underwater Vehicle dubbed SeaBED launched off a British and an Australian ship at three sites around the Antarctic Peninsula.

The scientists found sea ice thickness in some places up to about 55 feet (17 metres), with average thickness much less. The findings indicate the ice cover may be thicker in some areas than previously thought.

"Sea ice thickness and its variability in the Antarctic remains one of the great unknowns in the climate system," said sea ice expert Ted Maksym of Woods Hole Oceanographic Institution in Massachusetts.

Unlike in the Arctic region, where large declines in thickness have been measured in recent decades, scientists do not really have a good handle on the average Antarctic sea ice thickness or on any possible trends there, Maksym said.

"By demonstrating that detailed mapping of the thickness of the ice over large areas is possible deep in the ice pack, this represents and important step towards greater understanding of the processes that control the ice volume, particularly in areas that have been difficult to access," Maksym added.

"While we have not measured all Antarctic sea ice thickness and cannot state if Antarctic sea ice is getting thicker, this study is a huge step towards the sort of expanded and more routine measurements we will need to do to truly answer these questions," said polar oceanographer Guy Williams of the Institute of Marine and Antarctic Studies in Australia.

The research was published in the journal Nature Geoscience.