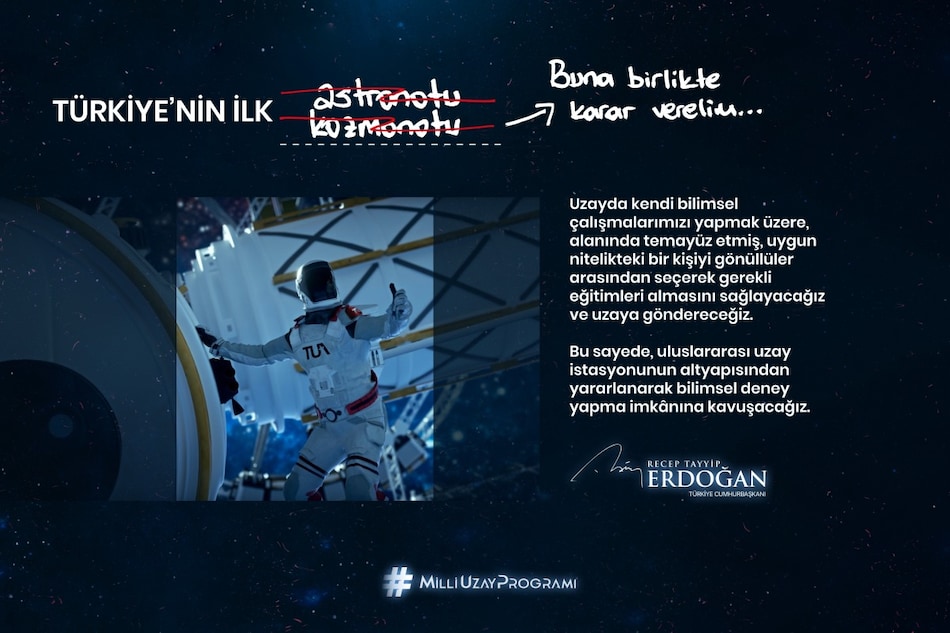 Erdogan announced the programme, seen as part of his vision for placing Turkey in expanded regional and global role, during a live televised event laced with special effects.

He said Turkey planned to establish “a first contact with the moon” in 2023, when the country marks the centennial of the founding of the Turkish republic. The first stage of the mission would be “through international cooperation,” while the second stage would utilize Turkish rockets, Erdogan said.

“Our primary and most important goal for our national space programme is the contact of the Republic, in its 100th year, with the moon,” the Turkish leader said. “God willing, we are going to the Moon.”

Erdogan also declared Turkey's aim to send Turkish citizens into space with international cooperation, to work with other countries on building a spaceport and to create a “global brand” in satellite technology.

“I hope that this roadmap, which will carry Turkey to the top league in the global space race, will come to life successfully,” he said.

Turkey established the Turkish Space Agency, or TUA, in 2018, with the aim of joining the handful of other countries with space programmes.

Critics have questioned the government's decision to spend vast sums of money on that goal at a time when the country's economy is suffering. But supporters say a space programme will provide jobs for researchers and is likely to reduce the brain drain of emigrating scientists.

Erdogan did not provide details on how Turkey plans to achieve its goals. Last month, he and SpaceX CEO Elon Musk spoke by telephone and discussed cooperation on space technologies with Turkish companies.

Meanwhile, a metal monolith that mysteriously appeared and disappeared on a field in southeast Turkey turned out to be a publicity gimmick before the event.

The3-metre--high (about 10-feet-high) metal slab with the inscription “Look at the sky, you will see the moon” written in an ancient Turkic script was found Friday by a farmer in Sanliurfa province. The monolith was near the UNESCO World Heritage site of Gobekli Tepe, which is home to megalithic structures dating to the 10th century BC, thousands of years before Stonehenge.

The structure was reported gone Tuesday morning, adding to the mystery.

An image of the monolith was later projected on the screen as Erdogan said: “I now present to you Turkey's 10-year vision, strategy and aims and I say, ‘Look at the sky, you will see the moon.'”

Tesla’s $1.5 Billion Bitcoin Investment Follows Months of Elon Musk Twitter Talk
Koo App: From How to Download Koo to App Features, Here’s Everything You Should Know About the Indian Alternative to Twitter