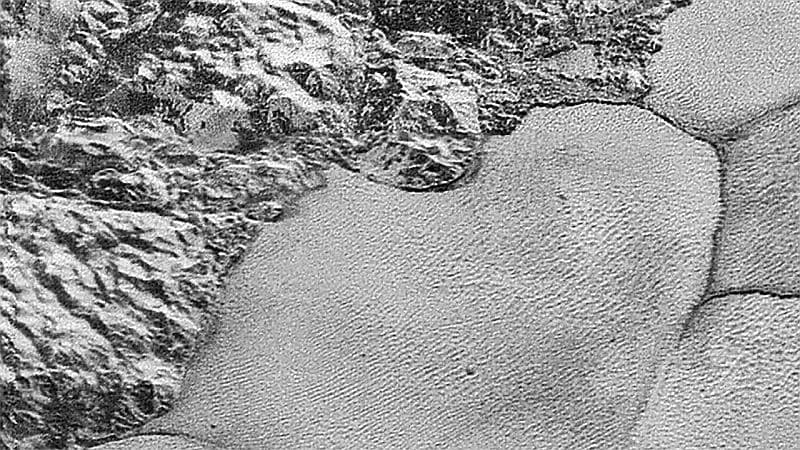 Pluto's atmosphere has a surface pressure 100,000 times lower than Earth's, which researchers suspected might be too little to allow tiny grains of solid methane to mobilize and become airborne.

Yet mild winds blowing across Pluto's surface at speeds of some 19-25 miles (30-40 kilometers) per hour have forged these ripples at the border of an ice plain and mountain range, said the report in the journal Science.

"The likely source of the dune grains is methane ice blown from nearby mountains," said the Science report. "Although nitrogen ice cannot be ruled out."

The dunes are scattered across a belt-like area some 45 miles (75 kilometers) across, and were spotted with NASA's New Horizons spacecraft when it flew by in 2015, said the report.

"When we first saw the New Horizons images, we thought instantly that these were dunes but it was really surprising because we know there is not much of an atmosphere," said co-author Jani Radebaugh, associate professor in the department of geological sciences at Brigham Young University.

"However despite being 30 times further away from the Sun as the Earth, it turns out Pluto still has Earth-like characteristics."

Other cosmic bodies that are known to have dunes - besides Earth - include Mars and Venus, as well as Saturn's moon Titan and the comet 67P/ Churyumov-Gerasimenko.

"We knew that every solar system body with an atmosphere and a solid rocky surface has dunes on it, but we didn't know what we'd find on Pluto," said lead author Matt Telfer, Lecturer in physical geography at the University of Plymouth.

"It turns out that even though there is so little atmosphere, and the surface temperature is around -230 Celsius (-382 Fahrenheit), we still get dunes forming."

On Earth, to form such dunes with sand requires stronger winds, said Co-Author Eric Parteli, Lecturer in Computational Geosciences at the University of Cologne.

"The considerably lower gravity of Pluto, and the extremely low atmospheric pressure, means the winds needed to maintain sediment transport can be a hundred times lower," he said.

On Pluto, solar radiation also causes temperature gradients in the granular ice layer, which contributes to the ability of dunes to form.

"Together, we have found that these combined processes can form dunes under normal, everyday wind conditions on Pluto," Parteli said.