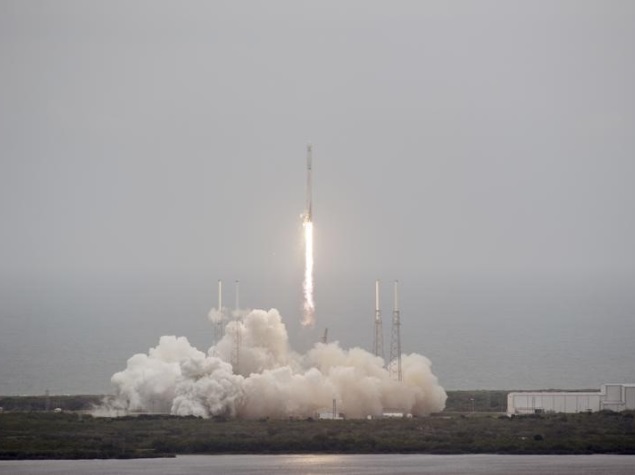 The rocket was on track for a 6:08 p.m. EDT (2208 GMT) liftoff from Cape Canaveral Air Force Station in Florida when engineers detected a possible problem with its upper-stage engine, Falcon 9 product director John Insprucker said during a launch webcast.

Flight directors reset countdown clocks to the end of a 53-minute launch opportunity, but ran out of time to assess the problem. The next launch window opens at 5:46 p.m. EDT (2146 GMT) on Saturday.

"Clock just running out of time to give the team enough minutes to evaluate the data we've been looking at for the last hour," Insprucker said.

The launch, which would be SpaceX's 10th Falcon 9 mission,is intended to put six of Orbcomm's 17 next-generation satellites into orbits about 500 miles (800 km) above Earth. The new satellites, built by privately owned Sierra Nevada Corp and Boeing Co, will join Orbcomm's existing 25-member network.

Each satellite in the $200 million, 17-member Orbcomm Generation 2, or OG2, constellation has more capacity than theentire existing constellation, he said.

In addition to longer messages between, for example,retailers and their shipping containers or construction companies and their cranes, OG2 will plug holes in the current system, making the network faster.

Currently, Orbcomm has gaps of about 30 to 60 minutes when satellites are out of range.

"We're launching directly into that hole in the sky so thenetwork is going to get dramatically quicker," Eisenberg said.OG2 spacecraft are designed to last 10 years.

"We've got a great base of customers and we need to showthem that there are years of service that Orbcomm is going tocontinue to supply," Eisenberg said. "Machine-to-machine communications - or the 'Internet of things' - has really picked up over time. It's just kind of hitting its stride now."

Orbcomm is paying a cut-rate $47 million for two Falcon 9flights, the second of which is slated for launch later thisyear.

Orbcomm originally bought rides on SpaceX's smaller Falcon 1boosters, but those rockets were retired in 2009. SpaceX moved Orbcomm to the larger Falcon 9s, but kept the price the same.

"That would be priced today at about $120 million,"Eisenberg said. "They kind of took it on the chin financially to make sure we had a path to space."