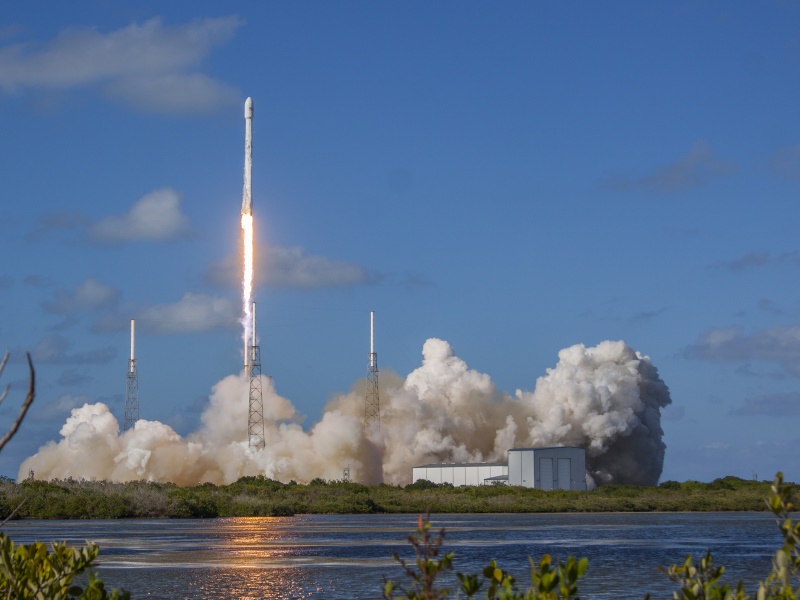 SpaceX launched an Asian communications satellite into a distant orbit Friday and for the fourth time managed to recover the rocket that did the work.

The rocket returned to Earth about 10 minutes later, firing its engines and maneuvering with its fins to an upright position on a powered barge, known as a drone ship, positioned in the Atlantic Ocean some 420 miles (680 kilometers) off the Florida coast.

SpaceX headquarters in Hawthorne, California erupted in cheers as the rocket touched down.

At first, the live webcast cut out briefly as the rocket neared the drone ship, then footage returned, showing the scorched but intact rocket standing straight and appearing steady.

"Rocket landing speed was close to design max," said SpaceX CEO Elon Musk on Twitter, noting that there was some "back and forth motion."

"Prob ok, but some risk of tipping," he added.

Musk wants to revolutionize the launch industry by making rocket components reusable, much the same way as commercial airplanes.

Currently, expensive rocket parts are jettisoned into the ocean after each launch.

SpaceX has managed to successfully land the first stage of its Falcon 9 rockets three times before - twice on water and once on land.

This is the second time SpaceX has landed on the ocean platform after a launch to geostationary transfer orbit, which is much further than the low-Earth orbit altitude at which the International Space Station circles the globe.

The high speed and heat involved with the rocket's return make a steady touchdown more challenging than a low-Earth orbit launch.

The primary mission of the lauch was also a success.

The Thaicom 8 satellite, which weighs about 6,600 pounds (3,000 kilograms) was deployed as planned.

Built by Orbital ATK, the satellite will provide broadcast and data services to South Asia and Southeast Asia for a period of 15 years.