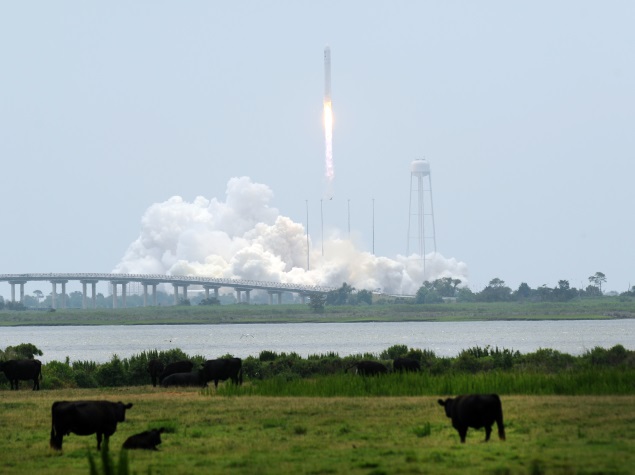 A Space Exploration Technologies Falcon 9 rocket thundered off its coastal launch pad at Cape Canaveral Air Force Station in Florida on Tuesday to put a commercial communications satellite into orbit.

On its second launch attempt of the day, the 224-foot (68-meter) rocket lifted off at 4 a.m. EDT/0800 GMT, blazing through partly cloudy, pre-dawn skies as it headed into space.

The first try, 2-1/2 hours earlier, ended less than a minute before liftoff when a computer found a potential problem with the rocket's first-stage engine, SpaceX officials said in a live webcast. The issue was resolved, clearing the rocket for flight.

Perched on top of the Falcon 9 was a communications satellite owned by Hong Kong-based Asia Satellite Telecommunications Holdings Ltd, or AsiaSat.

The spacecraft, known as AsiaSat 8 and built by Space Systems/Loral, a Palo Alto, Calif.-based subsidiary of Canada's MacDonald Dettwiler and Associates Ltd, will become the fifth member of an orbital network that provides telecommunication services to the Asia-Pacific region.

AsiaSat hired privately owned SpaceX for two satellite launches, the second of which is due to launch later this month.

"We gained confidence in seeing how they were developing technically," Wade said.

AsiaSat had not used a U.S. launcher since 2003.SpaceX's cut-rate launch price - rides on Falcon 9 were selling for about $54 million at the time - also was a factor, he said.

SpaceX's website shows the price of a Falcon 9 is now $61.2 million. The company, owned and operated by technology entrepreneur Elon Musk, has a backlog of nearly 40 missions.

Tuesday's launch was the SpaceX's second in three weeks. The company's last launch was delayed by a series of technical issues, which then bumped AsiaSat's launch.

"We're a few months later than we would liked to have been launched. That's not totally unexpected with a new launch provider. There are some growing pains and some teething that goes on with a new supplier," Wade said.

Once in orbit about 22,300 miles (35,888 km) over Asia, the new satellite, which is equipped with 24 Ku-band transponders and a Ka-band beam, will relay digital television, broadband and other telecommunications services for customers in India, China, Southeast Asia and the Middle East.

Including satellite construction, launch and insurance, the mission is costing AsiaSat between $180 million and $200 million, Wade said.

The satellite is designed to last for 15 years.