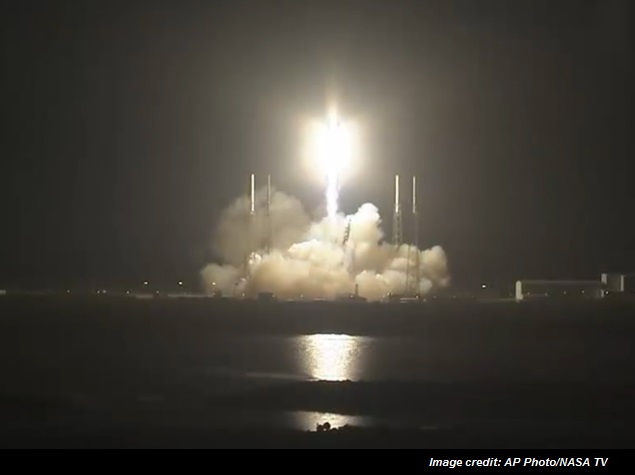 A SpaceX cargo ship rocketed toward the International Space Station on Sunday, carrying the first 3D printer for astronauts in orbit.

In all, the unmanned Dragon capsule is delivering more than 5,000 pounds (2,270 kilograms) of space station supplies for Nasa.

Dragon should reach the space station Tuesday. It's the fifth station shipment for the California-based SpaceX, one of two new commercial winners in the race to start launching Americans again from home soil.

The space station was soaring over the South Pacific when the SpaceX Falcon 9 thundered into Florida's pre-dawn sky. Sunday's weather was ideal for flying, unlike Saturday, when rain forced a delay. The rocket was visible for nearly three minutes as it sped out over the Atlantic, with the Orion constellation as a backdrop.

Sunday was a red-letter day for Nasa in more ways than one.

Besides the flawless launch, the space agency's Maven spacecraft was on the verge of reaching Mars. The robotic explorer was scheduled to go into orbit around Mars late Sunday night.

The space station-bound 3D printer was developed by Made in Space, another California company. It's sturdier than Earthly models to withstand the stresses of launch, and meets Nasa's strict safety standards. The space agency envisions astronauts one day cranking out spare parts as needed. For now, it's a technology demonstrator, with a bigger and better model to follow next year.

A $30 million device for measuring ocean winds is also flying up on Dragon, along with 20 mice and 30 fruit flies for biological research and metal samples for a golf club manufacturer looking to improve its products.

Much-needed spacesuit batteries are on board as well, along with the usual stash of food, clothes and electronic gear. Routine U.S. spacewalks were put on hold following last year's close call with an astronaut's flooded helmet. That problem was solved, then the battery fuses were called into question. Nasa hopes to resume spacewalks next month.

Just this past week, SpaceX - led by billionaire Elon Musk - won an even bigger and more prestigious contract to transport U.S. astronauts to the orbiting outpost, along with Boeing. Dragon rides could begin as early as 2016 or 2017.

Nasa's ability to launch its own crews ended with the shuttle program in 2011. Russia has been providing rides on its Soyuz spacecraft for a hefty price.

Another American astronaut is scheduled to blast off from Kazakhstan aboard a Russian Soyuz craft later this week, along with two Russians, one of them a woman, a rarity for Russia. They will join the one American, one Russian and one German already in orbit.

SpaceX was delighted with Sunday's success and the road ahead, and could hardly wait for the party to begin.

"Nothing like a good launch," observed Hans Koenigsmann, vice president of mission assurance for SpaceX. "It's just fantastic."