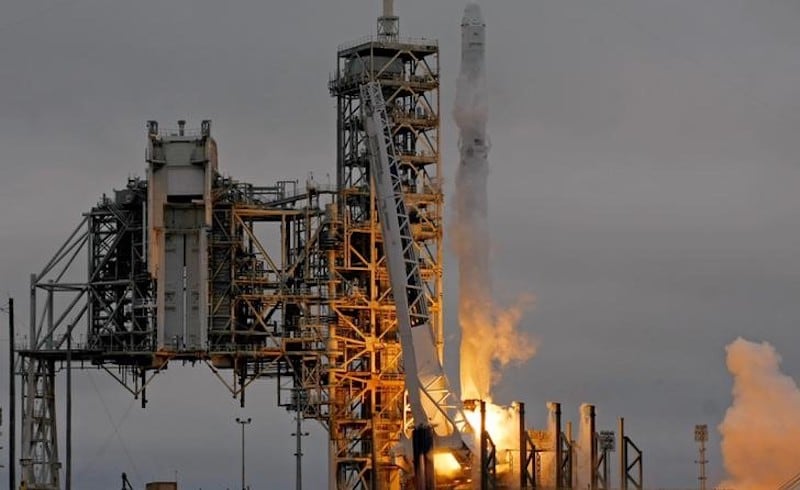 SpaceX on Sunday blasted off its Falcon 9 rocket carrying the unmanned Dragon cargo ship, packed with food and supplies for the six astronauts living at the International Space Station.

The white rocket soared into the cloudy, gray skies over Cape Canaveral, Florida at 9:38am (08:08pm IST).

The mission was the first to take off from NASA's historic launchpad 39A, the origin of the pioneering US spaceflights that took astronauts to the Moon in the 1960s and 1970s, as well as the space shuttle missions that ran from 1981 to 2011.

The launch was initially planned for Saturday, but was canceled just 13 seconds before liftoff due to a glitch with the rocket engine.

The origin of the problem - a piece of equipment known as the thrust vector control actuator in the second stage - was replaced. Subsequent tests showed it was working fine, a SpaceX spokesman explained.

The unmanned spaceship is packed with more than 5,000 pounds (2,267 kilograms) of food, gear and science experiments for the astronauts in orbit.

It is the 10th such resupply mission for SpaceX, which along with Orbital ATK has a multi-year contract with NASA to send supplies to the International Space Station.

The cargo is expected to arrive at the space station on February 22, a SpaceX spokesman said.

Successful landing
About 10 minutes after the launch, SpaceX refired the engines on the booster portion of the Falcon 9, guiding it down to a controlled, upright landing at a different part of Cape Canaveral.

"The Falcon has landed once again," a SpaceX spokeswoman said on a live webcast, as loud cheers and applause erupted at the company's mission control center in Hawthorne, California.

The touchdown marked the third time SpaceX has managed to stick a landing on solid ground.

Other such landings have taken place on floating ocean platforms, as the company perfects its techniques of powering costly rocket parts back to land instead of jettisoning them in the ocean after a single use.

Crew vehicle
SpaceX is also developing a version of its Dragon capsule that can one day carry astronauts to space.

SpaceX says the first crew flights will take place in 2018, though a Government Accountability Office (GAO) report out last week predicted that schedule delays and budget cuts would push it back to 2019.

SpaceX's chief operating officer Gwynne Shotwell insisted Friday that the company is on target for 2018, saying she was "very confident" in that deadline.

The retirement of the US space shuttle program in 2011 left the United States without any spacecraft for sending people into orbit.

Since then, the world's astronauts have hitched rides aboard Russia's Soyuz spaceships, which fit three people at a time.

The cost for a single astronaut's transport is currently $82 million, the GAO report said.