Travelling Through a Wormhole in Space May Be Possible, New Research Suggests

Even if it was possible, a special machine to allow humans to travel to a different point in the universe through a wormhole still seems far away. 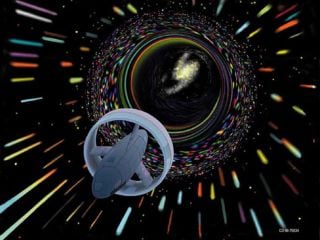 The favorite space travel maneuvers in and out of a wormhole of science-fiction fables could be more real than we thought. Physicists initially did not know whether black holes existed in the real world. Over the years, they said black holes are very real and then showed they even exist in our galaxy, using the theory of general relativity, which predicts that a sufficiently compact mass can deform spacetime to create a black hole. This same theory is now being used to suggest wormholes — speculative tunnels that could create shortcuts for journeys across the universe — could also be real, which would make it a lot easier to traverse the universe.

Physicists Juan Maldacena from the Institute for Advanced Study in the US and Alexey Milekhin from the Princeton University have found a method that could produce large holes. The two physicists have argued that the Randall-Sundrum II model allows for traversable wormhole solutions, where the wormholes are big enough that a person could traverse them and survive.

Though their research, published in APS Physics journal, is progress on previous studies on wormholes, a special machine to allow humans to travel to a different point in the universe through wormholes still seems far away. The two physicists want the mysterious dark matter in our universe to behave in a particular way for their discovery to succeed.

“We have a limited toolbox,” says Brianna Grado-White, a physicist and wormhole researcher at Brandeis University. “To get something to look the way we need it, there's only so many things we can do with that toolbox.”

The idea of a wormhole to create a bridge between two universes was first described by physicists Albert Einstein and Nathan Rosen in 1935. In theory, they discovered that a black hole's surface might work as a bridge to a second patch of space. Since then, many others imagined wormholes and said some of them might be “traversable”, meaning humans may be able to travel through them. But these ideas were limited by two challenges: fragility of these tubes and their tininess.

In late 2017, physicists found a breakthrough to prop open wormholes with quantum entanglement — a kind of long-distance connection between quantum entities. This new approach inspired a stream of work aimed at creating bigger, longer-lasting holes.

Physicists Lisa Randall and Raman Sundrum had proposed the Randall–Sundrum models in 1999 to address the Higgs Hierarchy Problem in particle physics.