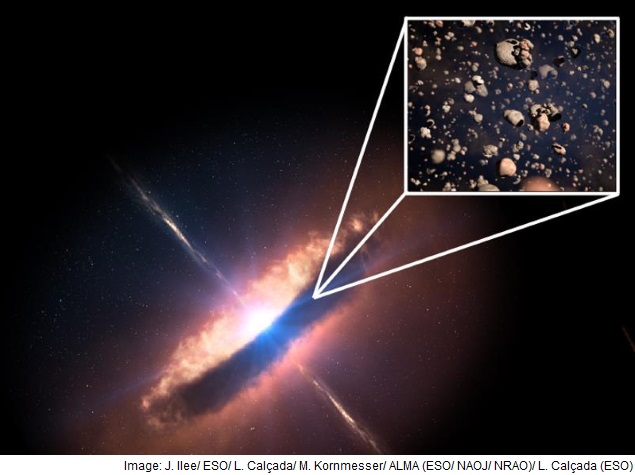 Astronomers have detected a ring of rocks or what is called a belt of pebbles, thought to be a crucial link in building planets, circling a very young star.

For the project, the researchers used the e-MERLIN array of radio telescopes centred on Jodrell Bank observatory in Britain.

"We found a belt of pebbles...just where they are needed if a planet is to grow in the next few million years. Although we thought this was how planets must get started, it is very exciting to actually see the process in action!" said Jane Greaves from University of St Andrews in Scotland.

Planets are thought to form from the dust and gas that encircles young stars in a disk. Over time, dust particles stick together, until they build up bigger clumps. Over millions of years the clumps crash together to make planets and moons.

In our own solar system, this process took place about 4,500 million years ago, with the giant planet Jupiter the first to form, the astronomers said.

Since the 1990s, astronomers have found both disks of gas and dust, and nearly 2,000 fully formed planets, but the intermediate stages of formation are harder to detect.

The scientists observed the star DG Tauri, a relatively youthful star just 2.5 million years old and 450 light years away from the Earth in the constellation of Taurus.

Looking at radio wavelengths, they discovered a faint glow characteristic of rocks in orbit around the newly formed star.

"We knew DG Tauri had a jet of hot gas flowing off its poles a beacon for stars still in the process of forming so we had an idea of what to look for," Anita Richards from the University of Manchester said.

"It was a real surprise to also see a belt of pebbles, with only a fraction of the data we hope to acquire. With the four-fold increase in radio bandwidth we are now working on, we hope to get similar images for a whole zoo of other young stars."

The researchers presented the work at the National Astronomy Meeting in Llandudno, Wales in Britain.

Mobile Shopping Sales to Cross $638 Billion by 2018: Study
Rover to Carry Earth's Art to the Moon