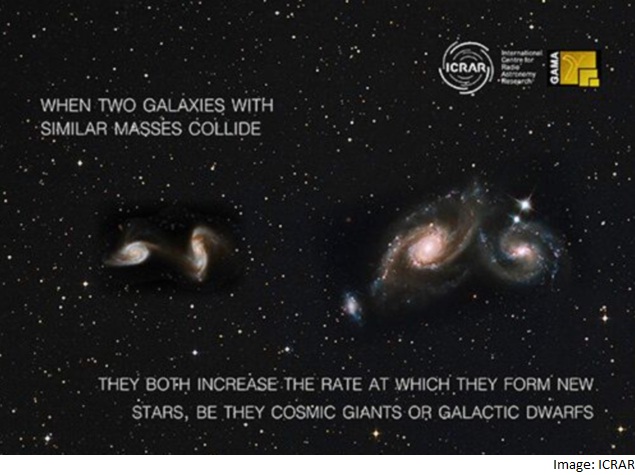 When two different sized galaxies smash together, the larger galaxy stops the smaller one from making new stars, a new study of more than 20,000 merging galaxies has found.

The researchers also found that when two galaxies of the same size collide, both galaxies produce stars at a much faster rate.

Luke Davies, astrophysicist from The University of Western Australia node of the International Centre for Radio Astronomy Research (ICRAR), said that our nearest major galactic neighbour, Andromeda, is hurtling on a collision course with the Milky Way at about 400,000 kilometres per hour.

"Don't panic yet, the two won't smash into each other for another four billion years or so. But investigating such cosmic collisions lets us better understand how galaxies grow and evolve," he said.

Previously, astronomers thought that when two galaxies smash into each other their gas clouds - where stars are born - get churned up and seed the birth of new stars much faster than if they remained separate.

However the new research, using the Galaxy and Mass Assembly (GAMA) survey observed using the Anglo-Australian Telescope in regional New South Wales, suggested that this idea is too simplistic.

According to Davies, whether a galaxy forms stars more rapidly in a collision, or forms any new stars at all, depends on if it is the "big guy or the little guy in this galactic car crash."

"When two galaxies of similar mass collide, they both increase their stellar birth rate," Davies said.

"However when one galaxy significantly outweighs the other, we have found that star formation rates are affected for both, just in different ways," he said.

"The more massive galaxy begins rapidly forming new stars, whereas the smaller galaxy suddenly struggles to make any at all," he said.

"This might be because the bigger galaxy strips away its smaller companion's gas, leaving it without star-forming fuel or because it stops the smaller galaxy obtaining the new gas required to form more stars," he said.

"As they get closer together they will begin to affect each other's star formation, and will continue to do so until they eventually merge to become a new galaxy, which some call 'Milkdromeda'," he said.

The study was published in the journal Monthly Notices of the Royal Astronomical Society.