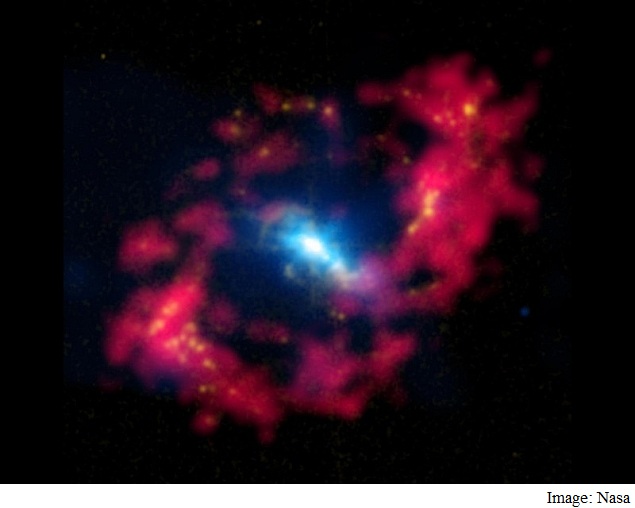 Scientists have developed a new way of measuring near precise distances to galaxies millions of light years away.

The method was applied to measure the accurate distance of a nearby galaxy called NGC4151, described the "Eye of Sauron" by astronomers inspired from the Hollywood film "The Lord of the Rings."

"One of the key findings is that the distance determined in this new fashion is quite precise - with only about 10 percent uncertainty," said Sebastian Hoenig from the University of Southampton.

The black holes inside the galaxies are growing by swallowing huge amounts of gas and dust from their surrounding environments.

In this process, the material heats up and becomes very bright - becoming the most energetic sources of emission in the universe known as active galactic nuclei (AGN).

The hot dust forms a ring around the supermassive black hole and emits infrared radiation, which the researchers used as the ruler.

To measure the physical size of the dusty ring, the researchers measured the time delay between the emission of light from very close to the black hole and the infrared emission.

This delay is the distance the light has to travel (at the speed of light) from close to the black hole out to the hot dust.

By combining this physical size of the dust ring with the apparent size, the researchers were able to determine a distance to the galaxy NGC4151.

"Indeed, NGC 4151 is a crucial anchor to calibrate various techniques to estimate black hole masses. Our new distance implies that these masses may have been systematically underestimated by 40 percent," Hoening concluded.

The study appeared in the journal Nature.