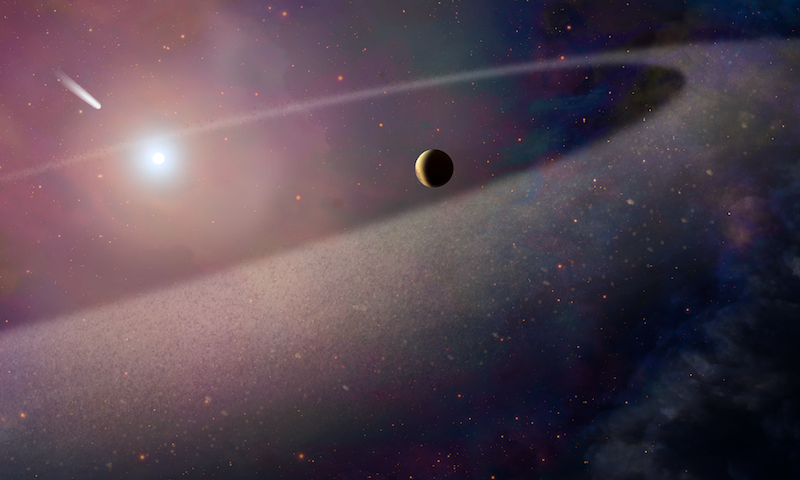 Scientists using NASA's Hubble space telescope have discovered a white dwarf star whose atmosphere is rich in materials that are the basic building blocks for life - carbon, nitrogen, as well as oxygen and hydrogen, the components of water.

The white dwarf is approximately 200 light years from the Earth and is located in the constellation Bootes, said the study.

The study presents evidence that the planetary system associated with the white dwarf contains materials that are the basic building blocks for life, said study co-author Benjamin Zuckerman, Professor at University of California, Los Angeles.

And although the study focused on this particular star - known as WD 1425+540 - the fact that its planetary system shares characteristics with our solar system strongly suggests that other planetary systems would also.

"The findings indicate that some of life's important preconditions are common in the universe," Zuckerman said.

Many scientists believe the Earth was dry when it first formed, and that the building blocks for life on our planet - carbon, nitrogen and water - appeared only later as a result of collisions with other objects in our solar system that had those elements.

The research, published in the Astrophysical Journal Letters, described how the white dwarf came to obtain carbon, nitrogen, oxygen and hydrogen.

The scientists reported that a minor planet in the planetary system was orbiting around the white dwarf, and its trajectory was somehow altered, perhaps by the gravitational pull of a planet in the same system.

Those remnants went into orbit around the white dwarf - much like the rings around Saturn, Zuckerman said - before eventually spiraling onto the star itself, bringing with them the building blocks for life.

The researchers think these events occurred relatively recently, perhaps in the past 100,000 years or so.

This was the first time that nitrogen was detected in the planetary debris that falls onto a white dwarf, said Siyi Xu of the European Southern Observatory in Garching, Germany.

"Nitrogen is a very important element for life as we know it," Xu, who led the team that made the discovery, explained.

"This particular object is quite rich in nitrogen, more so than any object observed in our solar system," Xu said.

Microsoft Visual Studio 2017 to Be Launched on March 7