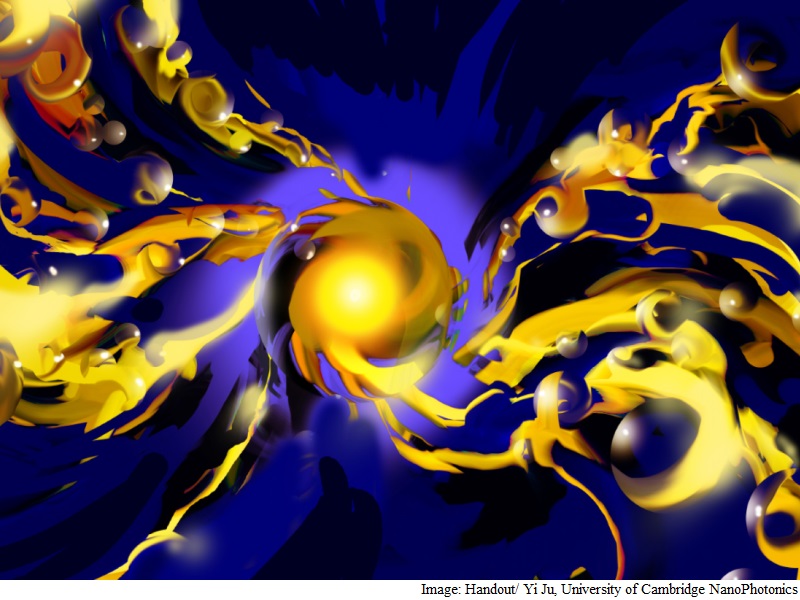 Picture an ant. It's fuzzy, black and small, maybe a fifth of an inch long and capable of carrying up to 50 times its own body weight. Now envision a powerful motor a million times smaller. (You can't, not really, but don't worry - the human brain wasn't designed that way.)

It's at this microscopic scale that scientists at the University of Cambridge say they've constructed a working engine. The prototype motor, which the physicists described Monday in the journal Proceedings of the National Academy of Sciences, relies on lasers, gold particles and the exploitation of a nifty physics principle called van der Waals forces.

The nanoscale engine works like this: Clumps of gold particles are embedded in a watery polymer gel, which the scientists blast with a laser for a brief moment. The laser heats up the gel, expelling the water as though wringing a sponge. Without the water to keep them separate, the gold particles cling together thanks to their mutual van der Waals attraction. (A van der Waals force is the relatively weak interaction between two neutral molecules it's not as strong as the bond holding a water molecule together, but it's powerful enough to keep a gecko foot stuck to a glass plate.)

Once the gel cools, the polymer once again soaks up water. The gold particles violently snap apart. "It's like an explosion," said Tao Ding, an author of the paper and a researcher at Cambridge's experimental physics laboratory, in a statement. "We have hundreds of gold balls flying apart in a millionth of a second when water molecules inflate the polymers around them." The researchers believe that this cycle of constriction and expansion, like the oscillations of a spring or the pumps of a piston, could be used to power a nanomachine.

Such an engine is, reportedly, quite efficient for its tiny size. "We can get 10 nano-Newton forces, about ten to a hundred times more force per unit weight than any known other machine, from jet engines to molecular motors," wrote Jeremy Baumberg, a University of Cambridge nanophotonics professor and an author of the paper, in an email to The Washington Post. Baumberg named the engines "actuating nano-transducers" - ANTs, for short, just like the small but strong insects.

Tao and Baumberg aren't the first scientists to claim creation of an incomprehensibly small engine. In 2014, Popular Mechanics investigated an engine that involves a single calcium-40 ion, which its inventors argued was so efficient it broke the laws of thermodynamics. Claims of busting theoretical limits aside, Popular Mechanics also noted that "the sheer amount of laboratory space and equipment these nano engines require means that we won't see them outside a lab anytime soon."

The Cambridge researchers say theirs is the first stab at a more functional nano-robot motor, thanks to the unique use of the van der Waals force. "We would say that this is really going to be the basis for 'practical' nanoscale engines," Baumberg said in his email. The springy gel provides sufficient power, they say, to get a nanotechnological device through our wet bodies. "For nanomachines," he pointed out, "swimming is like us swimming in treacle. Water is very, very viscous on this size scale. So you need huge forces to make practical devices, and no one has made these before." Moreover, because the engine is fueled by laser light, there's no need for wires.

Still, nanobots will remain firmly in the realm of science fiction for the time being. The University of Cambridge engine needs a bit of refining before it can be hitched to a nanoscale object. "Our main challenge is how to build a device that harnesses the forces for motion in one direction - a bit like a piston on a steam engine," Baumberg wrote. "Currently the force just expands and contracts in all directions." But a few steps down the line - once the directional problem is solved - he envisions "tiny nanomachines that can walk around, controlled by beams of light."