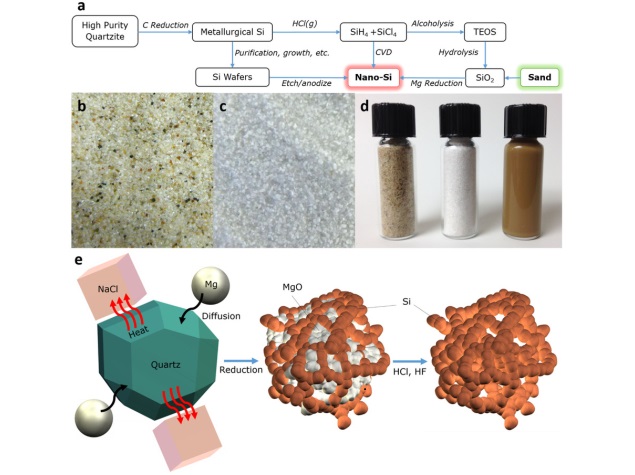 Believe it or not, using sand as the key material, researchers have created a lithium ion battery that can outperform the current industry standard by three times.

"This is the holy grail a low cost, non-toxic, environmentally friendly way to produce high performance lithium ion battery anodes," said Zachary Favors from University of California, Riverside in the US.

Currently graphite is used in battery anodes, and further improvements on graphite are not viable.

To make better batteries, researchers are focussed on nano silicon, the size of a billionth of a metre, as a replacement for graphite. Nanoscale silicon, however, degrades quickly and is difficult to produce in a large quantity.

To get large quantities, Zachary used the most common source of silica, beach sand from a beach at Cedar Creek.

This pure silicate sand was purified, powdered and then ground with salt and magnesium. This mixture was heated to remove oxygen from the quartz, resulting in pure silicon.

The team was fortunate that the pure nano-silicon formed had a porous three-dimensional silicon sponge like consistency.

That porosity has proved to be the key to improving the performance of the batteries built with the nano-silicon.

The improved performance could mean expanding the expected lifespan of silicon-based batteries up to three times or more.

The findings appeared in the journal Nature Scientific Reports.