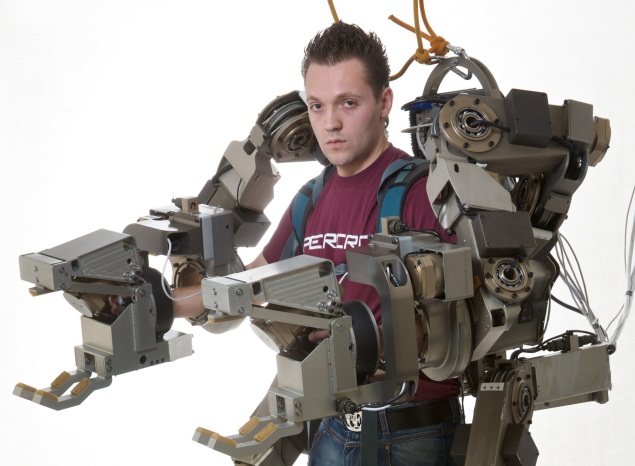 An Italian company claims to have developed the "world's most sophisticated" wearable robot that enables users to lift up to 50 kilograms in each hand. According to the company, the exoskeleton could be used by disaster workers to clear debris.

The Italian engineers said the wearable robot, called the "Body Extender", is the most sophisticated built in the world to date.

Developed at the Perceptual Robotics Laboratory (Percro) in Italy, the robot can lift 50 kilograms in each extended hand, and can exert 10 times the force the user applies to an object.

"This is the most complex wearable robot that has been ever built in the world," said Percro's Fabio Salsedo who led the project.

"It's a device which is able to track the complex movement of the human body and also to amplify the force of the operator," Salsedo said.

The device has arms and legs and is suspended by ropes from a metal frame. Its only other tether is a thick umbilical cable plugged into its back, BBC News reported.

The machine has 22 degrees of freedom, and is actuated with an electric motor. It is made up of modular components, which means the robot can be easily rebuilt to suit the application.

"There are several possible applications. For example if you have to assemble a very complex product like an aircraft, this is a machine which is very flexible. You can lift the panel, rotate it and position it in the right position," Salsedo said.

"Another application is the rescue of victims in case of an earthquake. You need something very flexible in order to intervene rapidly without damaging the victim," Salsedo added.