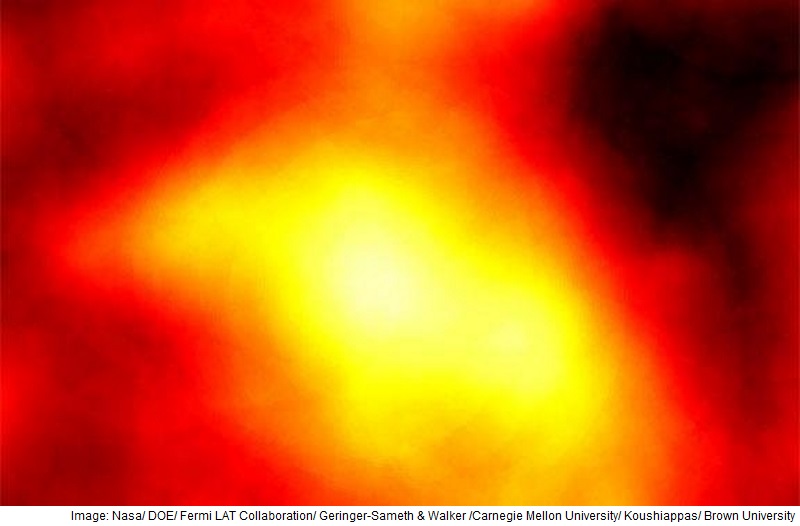 A newly discovered dwarf galaxy orbiting our Milky Way appears to be radiating gamma rays, according to an analysis by physicists at Carnegie Mellon, Brown and Cambridge universities.

The exact source of this high-energy light is uncertain at this point but it just might be a signal of dark matter lurking at the galaxy's centre.

"Something in the direction of this dwarf galaxy is emitting gamma rays. There is no conventional reason this galaxy should be giving off gamma rays, so it's potentially a signal for dark matter," explained Alex Geringer-Sameth, post-doctoral research associate and the lead author.

The galaxy, named Reticulum 2, was discovered earlier this year in the data of the Dark Energy Survey, an experiment that maps the southern sky to understand the accelerated expansion of the universe.

At approximately 98,000 light-years from Earth, Reticulum 2 is one of the nearest dwarf galaxies yet detected.

Using publicly available data from Nasa's Fermi Gamma-ray Space Telescope, researchers have shown gamma rays coming from the direction of the galaxy in excess of what would be expected from normal background.

In the search for dark matter, gamma rays from a dwarf galaxy have long been considered a very strong signature.

"It seems like we may now be detecting such a thing for the first time," added Savvas Koushiappas from Brown University.

No one knows exactly what dark matter is but it is thought to account for around 80 percent of the matter in the universe.

A paper describing the analysis was published in the journal Physical Review Letters.

The gravitational detection of dark matter tells you very little about the particle behaviour of the dark matter.

"But now we may have a non-gravitational detection that shows dark matter behaving like a particle, which is a holy grail of sorts," added Matthew Walker, assistant professor of physics at Carnegie Mellon.

Further study of this dwarf galaxy's attributes could reveal hidden sources that may be emitting gamma rays.