New Era in Safety When Cars Talk to One Another 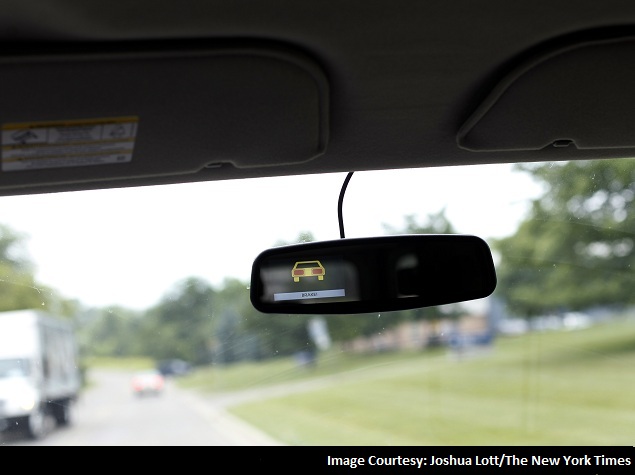 A driver moves along in traffic, the forward view blocked by a truck or a bend in the road. Suddenly, up ahead, someone slams on the brake. Tires screech.

There is little time to react.

Researchers here are working to add time to that equation. They envision a not-too-distant future in which vehicles are in constant, harmonious communication with one another and their surroundings, instantly warning drivers of unseen dangers.

When a motorist brakes quickly, a careless driver runs a red light or a truck bears down unseen in a passing lane, dashboards in nearby cars light up immediately with warnings - providing additional reaction time to avoid a pileup.

The Transportation Department announced this week a plan to require in coming years that the technology, so-called vehicle-to-vehicle communication, be installed in all cars and trucks in the United States. Transportation Secretary Anthony Foxx called it "the next great advance in saving lives."

Google may already be experimenting with its own driverless cars, but the technology being tested in this university town by a group of academic, industry and government researchers could be retrofitted into ordinary cars.

(Also See: US Government Wants to Make Cars Talk to Each Other)

The National Highway Traffic Safety Administration estimates that vehicle-to-vehicle transmitters will add only about $350 to the total cost of a vehicle by 2020. The safety agency expects prices to fall as the mandate approaches, as has already happened with features like rearview cameras, which will be required in 2018. By the end of the decade, if all goes as planned, the typical American vehicle will be part of a network, constantly sharing information as it travels.

At a government-sponsored pilot program here in Ann Arbor, being run by the University of Michigan Transportation Research Institute, nearly 3,000 vehicles driven by volunteers are being tested in real-world conditions. Transmitters in the vehicles send and receive information 10 times a second: speed, direction, location and other data that automakers and federal regulators hope will usher in a new era of road safety.

Drivers today can buy cars that monitor blind spots, warn them when they veer out of a lane and even park themselves. Such features are overseen by sensors inside the car: cameras, radar and lasers that scan the road like electronic eyes.

Like any pair of eyes, however, they can warn about only what they can see. The technology developing in Ann Arbor focuses on hazards even electronic eyes can't spot.

"If there are several vehicles between you and the one that's panic-braking, you may not even be aware of it," said Debby Bezzina, assistant program manager for the University of Michigan experiment. "You definitely can't see their taillights."

The wireless technology goes beyond cars talking to other cars. It also allows the roads themselves to communicate - not just about traffic jams or road work, but whether there is black ice ahead, for instance. Even traffic lights can be part of the network.

On a recent summer morning, Bezzina pointed to the digital display in a university test vehicle as it drove through Ann Arbor's model deployment zone, which includes about 70 miles of roadway throughout the city, about an hour west of Detroit.

As the vehicle approached a green light, the screen showed how many seconds remained before it turned red.

"Think about how modern crosswalks show you how much time you have left to walk across the street," she said. "It makes things safer; you're not guessing or possibly panicking. This is the same idea, only for vehicles."

A network of cars and traffic signals could also inform drivers what speed to travel to hit all the green lights ahead, creating a so-called greenway. That would not only ease congestion but help with fuel efficiency, too.

But it's avoiding accidents that has federal regulators most interested.

Bezzina demonstrated with test vehicles a common hazard: a driver stopping short. A companion car positioned itself a couple of hundred feet ahead and forcefully hit its brakes. Instantly, a red warning signal flashed on the rearview mirror, and a loud tone sounded.

"That will certainly get your attention," she said.

The Ann Arbor pilot program started equipping local vehicles in 2012 with wireless transmitters, which operate on a special frequency set aside for vehicle-to-vehicle technology. Researchers signed up nearly 3,000 volunteers in Ann Arbor, and a consortium of eight automakers joined the effort as well, bringing their own test cars. The goal was to have a critical mass of networked vehicles in the test so that detailed data could be gathered about how, or if, the interactive systems were working. Drivers come in every few weeks to download data from hard drives stored in the trunk.

The experiment was meant to last a year, but it has been expanded to a three-year program that could soon incorporate about 9,000 local participants, including, for the first time, pedestrians carrying tiny transmitters.

A lesson automakers are learning in Ann Arbor is that if the vehicle-to-vehicle system's warnings are going to be effective, they had better be right.

"People don't have a lot of tolerance for things that become a nuisance," said Jim Keller, the chief engineer overseeing connected vehicles at Honda. "What you don't want is these things going off all the time when it's a false alarm. You need it to only work if there's a problem."

If such projects succeed, the benefits could be considerable. The Transportation Department predicts that eight out of every 10 traffic accidents involving unimpaired drivers could be prevented.

A recent report by the National Highway Traffic Safety Administration put it at about 600,000 fewer crashes involving left turns or intersections, saving more than 1,000 lives annually.

"We're not interested in this because it's cool," he said. "We think there's a fundamental benefit where people can be safer if they have this technology."

He added: "We believe, longer term, it will be part of the suite of technologies that will bring about a true driverless car."

"You can keep a car in its lane with cameras and radar, but merging, passing - these things require awareness of other cars on the highway," Hada said. "This technology can play a significant role."

The rapid exchanging of so much data naturally raises concerns about computer security, which until now has not been a concern for most automakers.

"It's not sending credit card information or anything like that," Hada said of vehicle-to-vehicle technology. "But when people hear about a wireless communications system, they care about privacy and security."

He said some fears can be alleviated just by understanding that unlike cellphones or GPS devices, vehicle-to-vehicle communication transmitters have a range of only a few hundred yards. They are designed to talk to nearby cars and infrastructure, like a two-way radio, but don't track movements over time or record personal information.

Making sure the new systems are secure has led automakers to welcome new kinds of specialists.

"Traditionally, we sell steel and rubber," Hada said. "But we are now able to bring in talented people from computer science, from the world of control systems and algorithms. It's an exciting environment."

Many in the auto industry realize car-to-car communication is half the picture. The use of road sensors and other infrastructure will spread more slowly.

"What you want is for the infrastructure to be there and have cars roll off the lot ready to talk to these various signals," Keller of Honda said.

But with local governments around the country facing budget pressure, "it's not going to be that way," he said. "So it's going to be interesting to see how things play out."