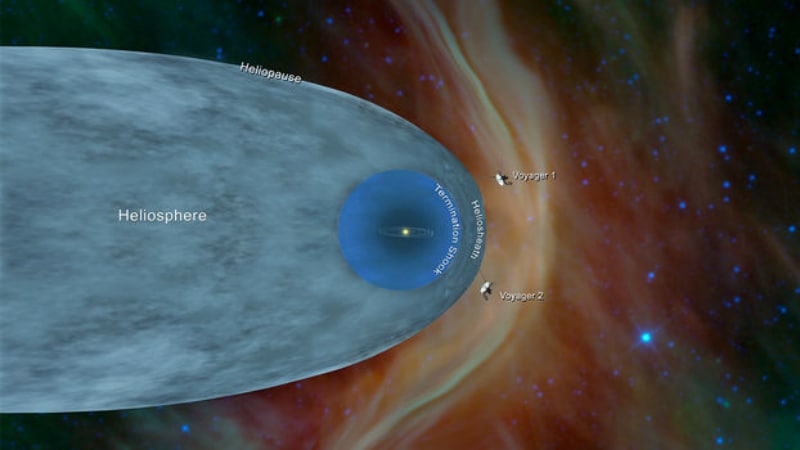 The US-based space agency NASA's probe Voyager 2 has exited the heliosphere, the protective bubble of particles and magnetic fields created by the Sun, enveloping its planets.

This is the second time in history, a human-made object reached the space between the stars, more than 18 billion kilometers from Earth, NASA announced on Monday.

Voyager 2 was launched in 1977, 16 days before Voyager 1, and both have travelled well beyond their original destinations: Jupiter and Saturn, stretching their four-year lifespan into 41 years. Voyager 2 is now NASA's longest running mission, reports Xinhua.

The mission scientists determined the probe crossed on November 5. The outer edge of the heliosphere, a boundary where hot solar wind meets the cold interstellar medium.

Its messages are now taking about 16.5 hours to travel from the spacecraft to Earth, while light travelling from the Sun takes about eight minutes to reach our planet.

The probe's predecessor Voyager 1 crossed the boundary in 2012, but Voyager 2 carried a working instrument that will provide first-of-its-kind observations of the nature of this gateway into interstellar space.

The Plasma Science Experiment on Voyager 2, filled predominantly with plasma flowing out from our Sun until recently, observed a steep decline in the speed of the solar wind particles on November 5 and no solar wind flow afterwards.

"Our studies start at the Sun and extend out to everything the solar wind touches. To have the Voyagers sending back information about the edge of the Sun's influence gives us an unprecedented glimpse of truly uncharted territory," said Nicola Fox, director of the Heliophysics Division at NASA Headquarters.

The width of Oort Cloud is estimated to begin at about 1,000 astronomical units (AU) from the Sun and to extend to about 100,000 AU. One AU is the distance from the Sun to Earth.

It will take about 300 years for Voyager 2 to reach the inner edge of the Oort Cloud and possibly 30,000 years to fly beyond it, according to NASA.