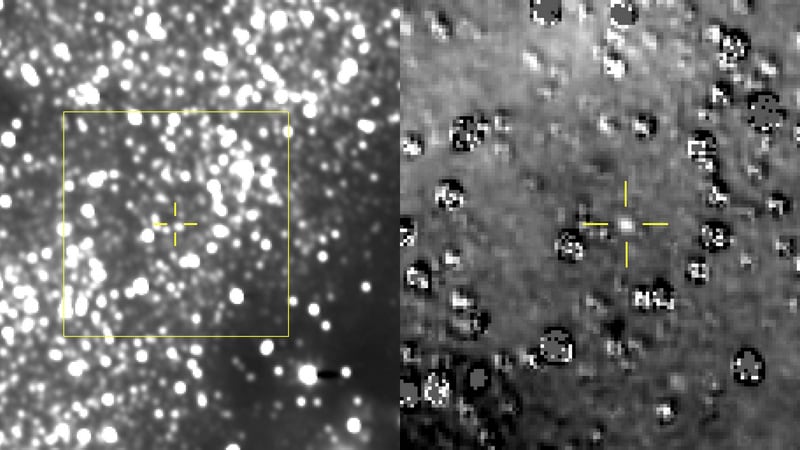 Kuiper Belt object at the centre of the box (left), magnified view of the region in yellow box (right)

NASA's New Horizons spacecraft has detected its next flyby target, which is an icy world a billion kilometres past Pluto, from more than 160 million kilometres away and over four months ahead of its New Year's 2019 close encounter.

On August 16, News Horizons' Long Range Reconnaissance Imager (LORRI), took a set of 48 images, from 172 million kms, 64 billion kms from the Sun and against a dense background of stars.

"The image field is extremely rich with background stars, which makes it difficult to detect faint objects," Hal Weaver, New Horizons project scientist from the Johns Hopkins Applied Physics Laboratory in Maryland, US, said in a statement.

"It really is like finding a needle in a haystack. In these first images, Ultima appears only as a bump on the side of a background star that's roughly 17 times brighter, but Ultima will be getting brighter and easier to see as the spacecraft gets closer."

This marked the team's first attempt to find Ultima with the spacecraft's own cameras and that the object is very close to where scientists predicted.

The observations of Ultima over the next four months will help the New Horizons team refine the spacecraft's course towards the closest approach to Ultima, at 12:33am EST on January 1, 2019.

The Ultima flyby will be the first-ever close-up exploration of a small Kuiper Belt object and the farthest exploration of any planetary body in history, shattering the record New Horizons itself set at Pluto in July 2015 by about 16 billion kms, NASA said.

"We now have Ultima in our sights from much farther out than once thought possible. We are on Ultima's doorstep, and an amazing exploration awaits!" said New Horizons Principal Investigator Alan Stern, from the Southwest Research Institute in Boulder, Colorado.