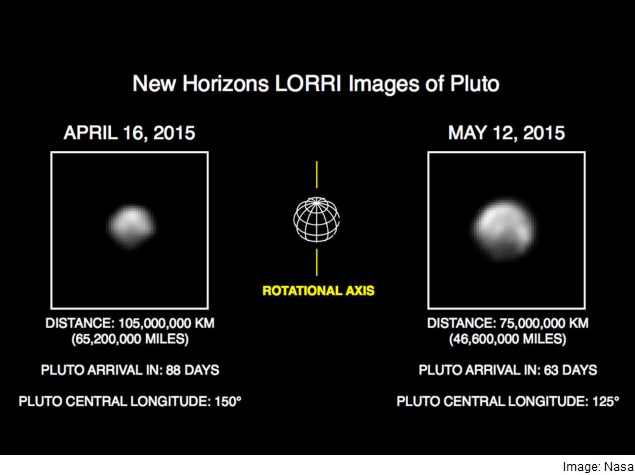 Nasa's New Horizons spacecraft, on way to meet Pluto, has taken fresh images of the mysterious planet that reveal more detail about its complex and high contrast surface.

The images were taken from just under 77 million kilometres away, using the Long-Range Reconnaissance Imager (LORRI) on New Horizons.

"As New Horizons closes in on Pluto, it is transforming from a point of light to a planetary object of intense interest. We are in for an exciting ride for the next seven weeks," said Jim Green, Nasa's director of planetary Science.

Pluto rotates around its axis every 6.4 Earth days and these images show the variations in Pluto's surface features during its rotation.

"These new images show us that Pluto's differing faces are each distinct; likely hinting at what may be very complex surface geology or variations in surface composition from place to place," added Alan Stern, New Horizons' principal investigator.

These images also continue to support the hypothesis that Pluto has a polar cap whose extent varies with longitude.

The astronomers will be able to make a definitive determination of the polar bright region's iciness when they get compositional spectroscopy of that region in July.

The images New Horizons return will dramatically improve in coming weeks as the spacecraft speeds closer to its July 14 encounter with the Pluto system, covering about 750,000 miles per day.

Following a January 2006 launch, New Horizons is currently about 2.95 billion miles from home.

The spacecraft is healthy and all systems are operating normally.