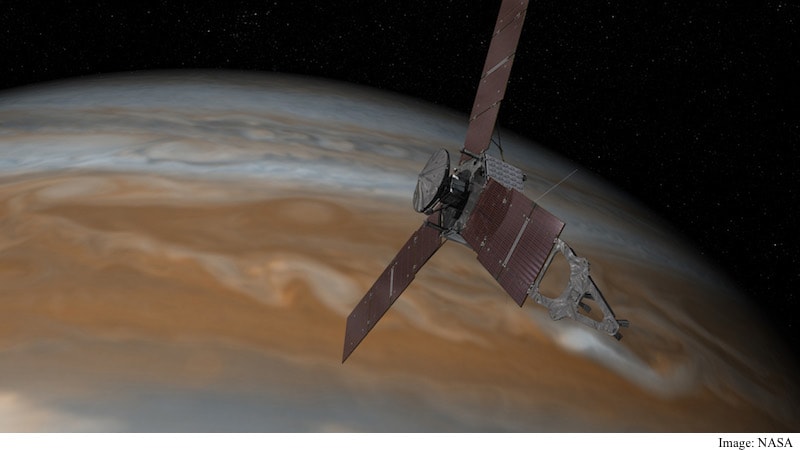 NASA's Juno spacecraft at Jupiter that entered safe mode on October 18 when a software performance monitor induced a reboot of the spacecraft's onboard computer, has left safe mode, NASA said.

"Juno exited safe mode as expected, is healthy and is responding to all our commands," Rick Nybakken, Juno project manager from NASA's Jet Propulsion Laboratory in Pasadena, California, said in a statement on Tuesday.

The team is still investigating the cause of the reboot and assessing two main engine check valves.

Indicating its good health, the spacecraft on Tuesday also successfully completed a minor burn of its thruster engines in preparation for its next close flyby of Jupiter.

"We anticipate we will be turning on the instruments in early November to get ready for our December flyby," Nybakken noted.

The burn, which lasted just over 31 minutes, changed Juno's orbital velocity by about 2.6 metres per second and consumed about 3.6 kilograms of propellant.

Juno will perform its next science flyby of Jupiter on December 11.

The complete suite of Juno's science instruments, as well as the JunoCam imager, will be collecting data during the upcoming flyby.

The Juno spacecraft launched from Cape Canaveral, Florida on August 5, 2011, and arrived at Jupiter on July 4, 2016.

During its mission of exploration, Juno soars low over the planet's cloud tops - as close as about 4,100 kilometres.

During these flybys, Juno probes beneath the obscuring cloud cover of Jupiter and studies its auroras to learn more about the planet's origins, structure, atmosphere and magnetosphere, NASA said.