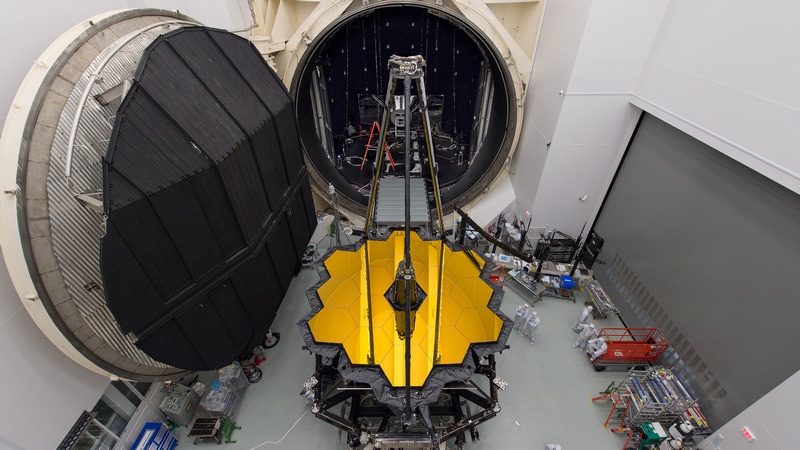 In a blow to NASA's science, its budget and its ego, the space agency will push back the launch of its James Webb Space Telescope until March 2021.

The delay is the latest in a series of embarrassing and expensive setbacks for the flagship space observatory, which has been billed as the high-powered successor to the Hubble Space Telescope. It comes at the recommendation of an independent review board that found the ambitious mission has been plagued by human errors, embedded problems and unrealistic expectations about the time and money required to build such a complex instrument.

According to NASA associate administrator Stephen Jurczyk, this latest delay will add an additional $800 million (roughly Rs. 5,500 crores) to the space telescope's development cost, bringing the total sticker price to $9.66 billion (roughly Rs. 66,700 crores). This exceeds a funding cap set by Congress in 2011, and NASA will have to ask for reauthorization in the next budget cycle.

Despite these difficulties, Jurczyk said, "Webb is a top priority mission with great national importance and it's worth the wait."

Conceived in 1996 and originally slated to launch in the mid 2000s, JWST has been described as "the telescope that ate astronomy" thanks to constantly slipping launch targets and ballooning budgets. The project has already been delayed once this year, to deal with issues that arose as the telescope components were brought together at the Redondo Beach, California, facility of Northrop Grumman, the project's main contractor.

Avoidable human mishaps have added 1.5 years and $600 million to the time and cost of development, the review board found. The wrong solvent was used to clean the propulsion system. A transducer was accidentally fried when it was incorrectly powered. And 70 improperly installed fasteners on the tennis-court sized sun shield fell off during testing; as many as four of them may still be lost inside the spacecraft, officials said.

"Training, discipline, high-quality procedures and assuring a failure-proof safety net is available are required to ensure human errors that occur in the future are minimized," review board chair Tom Young, a former NASA official and aerospace executive, told reporters Wednesday.

In total, the report lists 32 recommendations for addressing these problems and ensuring that the telescope makes it to the launch pad by its new deadline. These include providing Northrop Grumman with additional support staff from NASA, designating a commission-manager with systems engineering experience to oversee the remainder of the spacecraft's development, and conducting a thorough audit of the flight hardware drawings and procedures to uncover any problems that haven't yet been detected.

Thomas Zurbuchen, the associate administrator for NASA's Science Mission Directorate, said that NASA agreed with the recommendations and that many were already being implemented.

Asked whether Northrop Grumman would be penalized for the problems at its facility, NASA said the delays are factored into biannual evaluations of the contractor's performance, which determine whether it will earn awards on top of the cost of the project.

"Make no mistake, I'm not happy sitting here having to share this story," Zurbuchen said. "But the point is we're part of this team that has created this problem we're in. Northrup is part of this, but we have oversight of this, so we take responsibility as well."

The James Webb, which has cost more than $7.3 billion (roughly Rs. 50,000 crores) to develop, was a top priority in the National Academies of Sciences, Engineering and Medicine's 2000 Decadal Survey. Designed to work in the infrared part of the electromagnetic spectrum, its gold-covered, 20-foot-wide mirror will collect the oldest light in the universe, allowing scientists unprecedented insight into the time known as "cosmic dawn." It will also probe the mysteries of black holes and seek out signs of life on planets orbiting distant stars.

But much of the technology required for such a fantastic instrument didn't exist when the telescope was first conceived.

The new report chides NASA's "excessive optimism" in estimating how much time and money it would take to build the telescope, noting that "JWST is among the most complicated scientific experiments ever attempted."

Seven major aspects of the mission have never been tried before - including the telescope's massive sun shield and honeycomb-like segmented mirror, the transport to and launch from a European Space Agency port in French Guiana, and the flight to and operation from a spot a million miles from Earth - far more distant than Hubble.

This last point is crucial. Unlike the Hubble Space Telescope, which underwent repairs while in orbit, the JWST cannot be fixed after launch.

The ongoing problems has NASA considering whether it may have bitten off more than it could chew with the telescope.

"We want to take leaps, otherwise we're not NASA," Zurbuchen said. "But how big a bite should we take is really something we're asking across the board and trying to learn how to do it the right way."