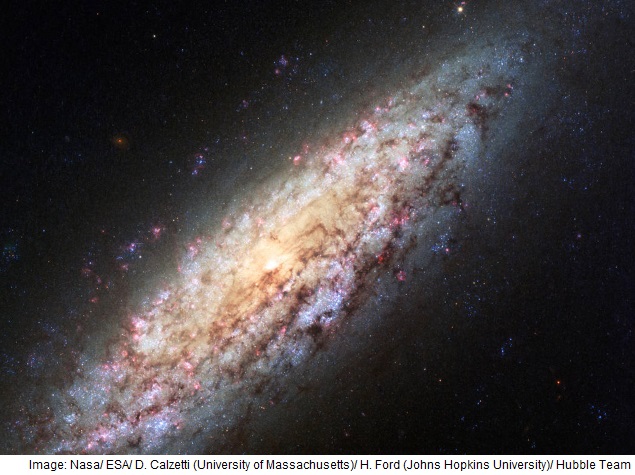 Nasa's Hubble space telescope has sent back images of a strange lonely galaxy called NGC 6503 in striking detail and also with a rich set of colours.

NGC 6503 is 18 million light-years away from us in the northern circumpolar constellation of Draco. NGC 6503 spans some 30,000 light-years, about a third of the size of the Milky Way.

Whereas most galaxies are found in clusters, this galaxy has found itself in a lonely position, at the edge of a strangely empty patch of space called the Local Void. The Local Void seems completely empty of stars or galaxies and is a huge stretch of space that is at least 150 million light-years across.

The galaxy's odd location led astronomer Stephen James O'Meara to call it the "Lost-In-Space galaxy" in his 2007 book, Hidden Treasures.

Dark brown dust lanes snake across the galaxy's bright arms and center, giving it a mottled appearance. The Hubble Advanced Camera for Surveys data for NGC 6503 were taken in April 2003, and the Wide Field Camera 3 data were taken in August 2013.

The Hubble Space Telescope is a project of international cooperation between Nasa and the European Space Agency.