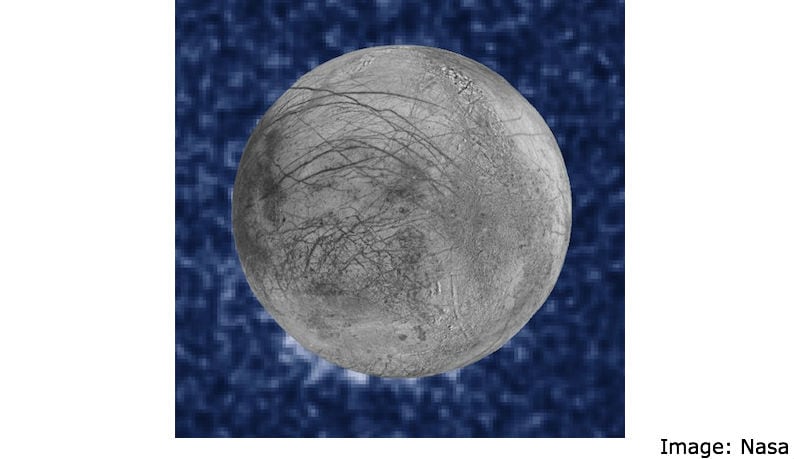 Astronomers on Monday said they have spotted evidence of water vapour plumes rising from Jupiter's moon Europa, a finding that might make it easier to learn whether life exists in the warm, salty ocean hidden beneath its icy surface.

The apparent plumes detected by the Hubble Space Telescope shoot about 125 miles (200 km) above Europa's surface before, presumably, raining material back down onto the moon's surface, Nasa said.

Europa, considered one of the most promising candidates for life in the solar system beyond Earth, boasts a global ocean with twice as much water as in all of Earth's seas hidden under a layer of extremely cold and hard ice of unknown thickness.

(Also see: There May Be Life Beneath Europa's Icy Shell: Researchers)

While drilling through the ice to test ocean water for signs of life would be a daunting task, sampling water from the plumes might be a simpler project.

"If the plumes are real, it potentially gives us easier access to the ocean below ... without needing to drill into miles of ice," said lead researcher Williams Sparks of the Space Telescope Science Institute in Greenbelt, Maryland.

Europa is about 1,900 miles (3,100 km) in diameter, slightly smaller than Earth's moon. Among Jupiter's four largest moons, Europa is the second closest to the biggest planet in the solar system.

On Earth, life is found everywhere where there is water, energy and nutrients, so scientists have a special interest in places elsewhere in the solar system, like Europa, with similar characteristics, said Paul Hertz, director of Nasa's astrophysics division.

The findings, which will be published in The Astrophysical Journal, follow an initial Hubble sighting of a water vapour plume over Europa's south pole in December 2012.

Scientists got their first hint that bright, icy Europa, which is crisscrossed by dark bands and ridges, contains an underground ocean from Nasa's twin Voyager probes, which flew by Jupiter in 1979.

The follow-on Galileo spacecraft, which circled around and through Jupiter's system from 1995 to 2003, detected a magnetic field that likely was triggered by a salty, global ocean beneath Europa's surface.

Two more missions are in development to visit Europa.

A Nasa spacecraft, targeted for launch in the mid-2020s, would make more than 40 close flybys of the moon and possibly sample material in any plumes shooting out from its surface.

Jupiter has 67 known moons, plus many smaller ones that have not yet been named.