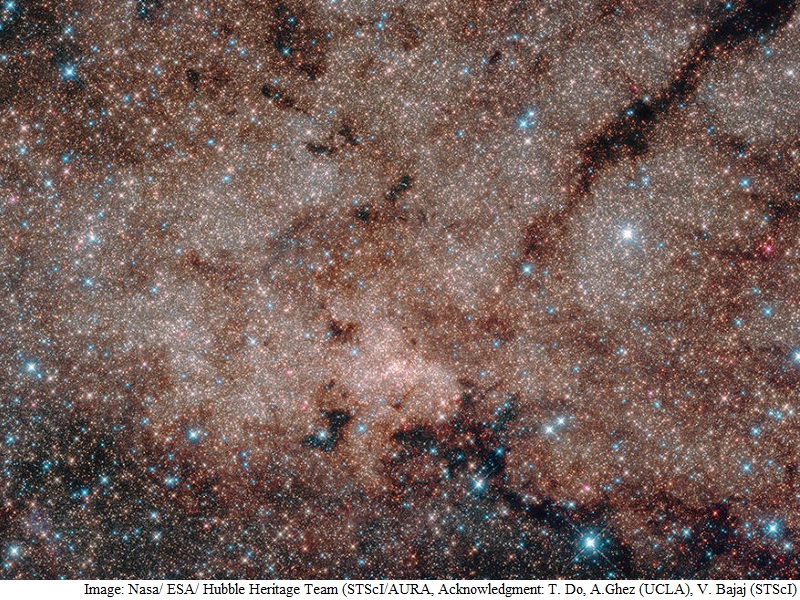 Delving deep into the heart of our Milky Way galaxy, Nasa's Hubble Space Telescope has revealed a rich tapestry of more than half a million stars at its core.

Except for a few blue foreground stars, the stars are part of the Milky Way's nuclear star cluster - the most massive and densest star cluster in our galaxy.

So packed with stars, it is equivalent to having a million suns crammed between us and our closest stellar neighbour Alpha Centauri.

At the very hub of our galaxy, this star cluster surrounds the Milky Way's central supermassive black hole which is about four million times the mass of our sun.

Astronomers used Hubble's infrared vision to pierce through the dust in the disk of our galaxy that obscures the star cluster.

Hubble's sharp vision allowed astronomers to measure the movements of the stars over four years.

Using this information, scientists were able to infer important properties such as the mass and structure of the nuclear star cluster.

The motion of the stars may also offer a glimpse into how the star cluster was formed -- whether it was built up over time by globular star clusters that happen to fall into the galaxy's centre, or from gas spiraling in from the Milky Way's disk to form stars at the core.

The picture, spanning 50 light-years across, is a mosaic stitched from nine separate images from Hubble's Wide Field Camera 3.

The centre of the Milky Way is located 27,000 light-years away.

Astronomers estimate that about 10 million stars in this cluster are too faint to be captured in this image.