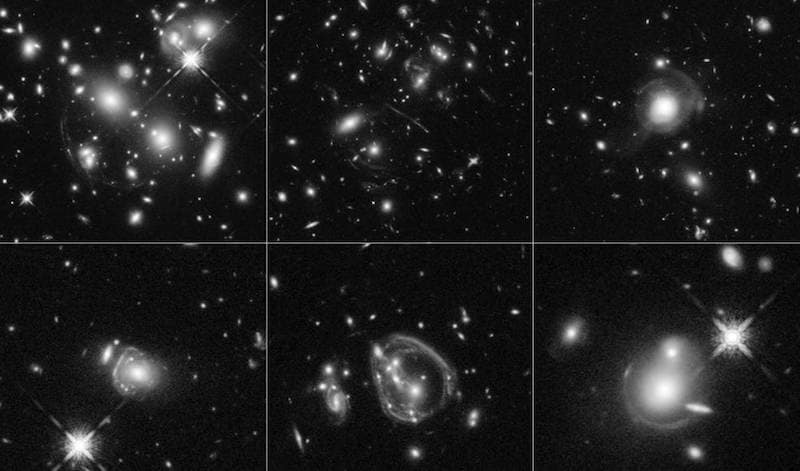 Using a cosmic magnifying-glass effect, NASA's Hubble Space Telescope has captured unique close-up views of the brightest infrared galaxies in the universe which are as much as 10,000 times more luminous than the Milky Way.

The cosmic magnifying effect, a phenomenon called gravitational lensing, occurs when the intense gravity of a massive galaxy or cluster of galaxies magnifies the light of fainter, more distant background sources.

The galaxy images revealed a tangled web of misshapen objects punctuated by exotic patterns such as rings and arcs.

The odd shapes are due largely to the foreground lensing galaxies' powerful gravity distorting the images of the background galaxies.

The unusual forms also may have been produced by spectacular collisions between distant, massive galaxies in a sort of cosmic demolition derby, the researchers observed.

"We have hit the jackpot of gravitational lenses," said lead researcher James Lowenthal of Smith College in Massachusetts, US.

"These ultra-luminous galaxies are very rare. Gravitational lensing magnifies them so that you can see small details that otherwise are unimaginable. We want to understand what's powering these monsters, and gravitational lensing allows us to study them," he added.

The results were presented at the American Astronomical Society meeting in Austin, Texas.

The galaxies are ablaze with runaway star formation, pumping out more than 10,000 new stars a year. This unusually rapid star birth occurred at the peak of the universe's star-making boom more than 8 billion years ago, the light from which we are observing now.

The star-birth frenzy creates lots of dust, which enshrouds the galaxies, making them too faint to detect in visible light. But they glow fiercely in infrared light, shining with the brilliance of 10 trillion to 100 trillion suns, the researchers noted.

According to researchers, there are only a few dozen of these bright infrared galaxies exist in the universe, scattered across the sky, which may hold clues to how galaxies formed billions of years ago.