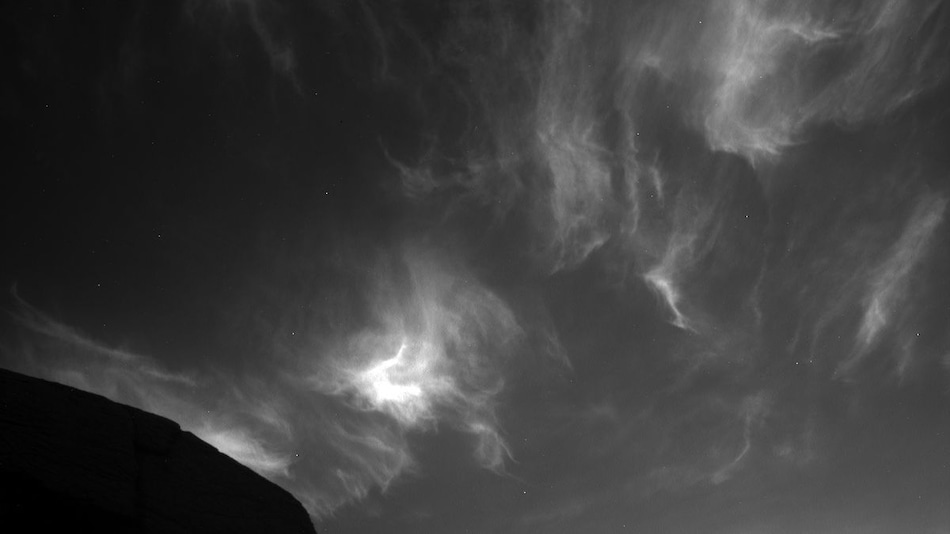 NASA's Curiosity Rover has shared a stunning new image of clouds on Mars. Captured by an onboard camera on the rover, the monochrome image shows grey clouds hovering over a cliff named Mont Mercou at twilight. In a blog post, NASA said the image was captured on sol 374 (one day in Mars is called sol) in a region that is just beginning to witness a cloudy season when the potential for the formation of twilight clouds is higher than usual. The rover is probing the compositions and textures on the Martian surface.

Quick! Stop scrolling.
What you see here aren't just any clouds, they're Martian clouds. Take a moment out of your day to look at the sky of another world.

But.. why there are any clouds in mars?, are they made of water vapor or another substance?

A Twitter user then attempted to address the issue by putting out an old tweet by the Curiosity Rover that said the Martian atmosphere “has water-ice clouds for most of the year.”

In July 2018, researchers for the first time found evidence that there could be a large body of liquid water, a lake, buried on the red planet. Two years later, they confirmed their discovery and said there could be three more such lakes on Mars. However, not all scientists are convinced that the regions identified in 2018 are liquid water. These discoveries, if verified, could be a significant milestone in the quest to determine whether life exists there.

In the blog post, NASA said its Environmental Theme Group is taking advantage of the cloudy season in the Gale crater region, where the Curiosity rover is currently roaming, to observe and analyse clouds and cloud formations. The team is also trying to capture images of the hill, Mont Mercou, from as many sides as possible to understand how this amazing outcrop formed.

Curiosity Rover touched down on the Martian surface in 2012 with the main objective of finding out if Mars is, or was, suitable for life.