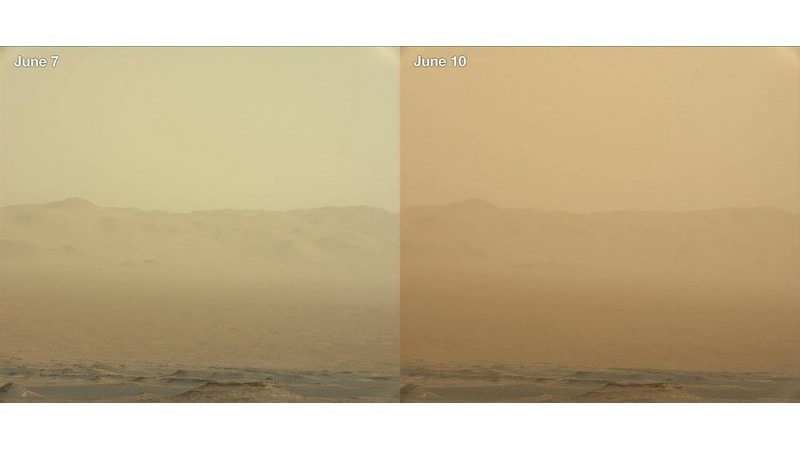 With NASA engineers yet to make contact with the Opportunity Mars rover due to a massive storm on the Red Planet, scientists are pinning their hopes on learning more about Martian dust storms from images captured by the Curiosity probe.

As of Tuesday morning, the Martian dust storm had grown in size and was officially a "planet-encircling" (or "global") dust event, NASA said in a statement on Wednesday.

Though Curiosity is on the other side of Mars from Opportunity, dust has steadily increased over it, more than doubling over the weekend, NASA said.

The US space agency said the Curiosity Rover this month used its Mast Camera, or Mastcam, to snap photos of the intensifying haziness of the surface of Mars caused by the massive dust storm.

For NASA's human scientists watching from the ground, Curiosity offers an unprecedented window to answer some questions. One of the biggest: Why do some Martian dust storms last for months and grow massive, while others stay small and last only a week?

Curiosity, he pointed out, plus a fleet of spacecraft in the orbit of Mars, will allow scientists for the first time to collect a wealth of dust information both from the surface and from space.

The last storm of global magnitude that enveloped Mars was in 2007, five years before Curiosity landed there.

The current storm has starkly increased dust at Gale Crater, where the Curiosity rover is studying the storm's effects from the surface.

But it poses little risk to the Curiosity rover, said Curiosity's engineers at NASA's Jet Propulsion Laboratory in Pasadena, California.

However, there was still no signal from the Opportunity rover, although a recent analysis of the rover's long-term survivability in Mars' extreme cold suggests Opportunity's electronics and batteries can stay warm enough to function.

Regardless, the project does not expect to hear from Opportunity until the skies begin to clear over the rover.

The dust storm is comparable in scale to a similar storm observed by Viking I in 1977, but not as big as the 2007 storm that Opportunity previously weathered.