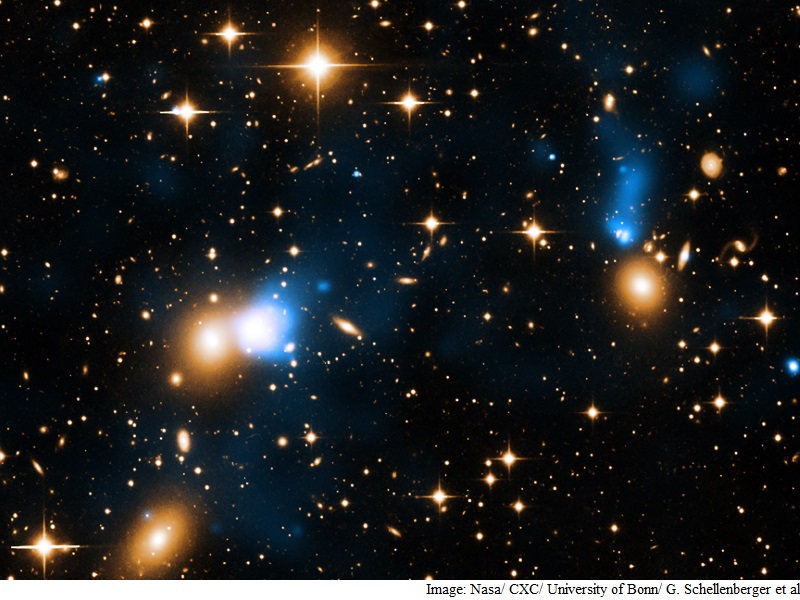 Nasa's Chandra X-ray Observatory has discovered an extraordinary ribbon of hot gas trailing behind a galaxy like a tail.

This ribbon, or X-ray tail, is likely due to gas stripped from the galaxy as it moves through a vast cloud of hot intergalactic gas.

With a length of at least 250,000 light years, it is likely the largest such tail ever detected.

The tail is located in the galaxy cluster Zwicky 8338, which is almost 700 million light years from Earth.

The length of the tail is more than twice the diameter of the entire Milky Way galaxy.

The tail contains gas at temperatures of about 10 million degrees Celsius but still hot enough to glow brightly in X-rays that Chandra can detect, the US space agency said in a statement.

The researchers think the tail was created as a galaxy known as CGCG254-021, or perhaps a group of galaxies dominated by this large galaxy, plowed through the hot gas in Zwicky 8338.

The pressure exerted by this rapid motion caused gas to be stripped away from the galaxy.

Astronomers were also able to learn more about the interactions of the system by carefully examining the properties of the galaxy and its tail.

The tail has a brighter spot, referred to as its "head". Behind this head is the tail of diffuse X-ray emission.

The gas in the head may be cooler and richer in elements heavier than helium than the rest of the tail.

In front of the head there are hints of a bow shock, similar to a shock wave formed by a supersonic plane and in front of the bow shock is the galaxy CGCG254-021.

The paper describing these results was published in the Astronomy and Astrophysics journal.