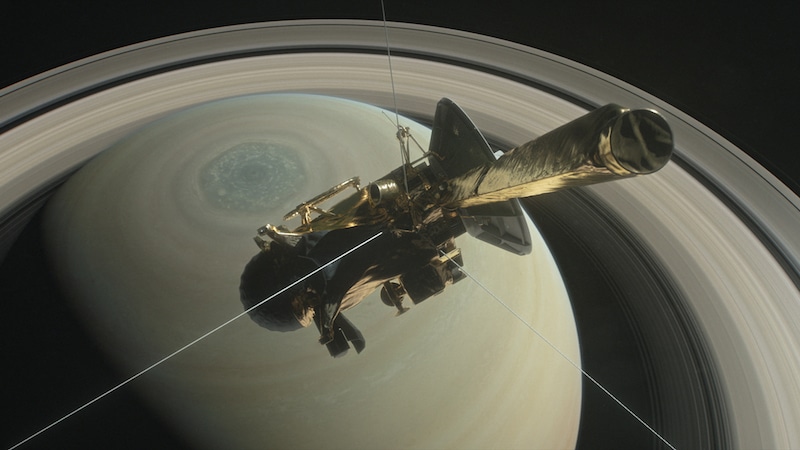 An unmanned NASA spacecraft, Cassini, has plunged into the gap between Saturn and its rings, a pioneering journey that could offer an unprecedented view of the sixth planet from the Sun.

The first of the spaceship's 22 deep dives between Saturn and its innermost ring occurred on Wednesday at 9am GMT (2:30pm IST), NASA said.

Now comes a nail-biting wait. Communications with the spacecraft will go dark during the dive and for about a day afterward, while it makes scientific observations of the planet.

This is it! Through the gap between #Saturn and its rings. Instruments are on, but we're out of contact with Earth. Here we goooooo! pic.twitter.com/3J7aRZS0IH

"Images and other data are expected to begin flowing in shortly after communication is established," NASA said.

Cassini is running low on fuel, and will make a death plunge into Saturn's surface on September 15.

The decision to end the mission was made in 2010, to avoid damaging moons like Enceladus, which could be explored for signs of life in the future.

Dangerous moment
Venturing between the planet and its rings for the first time represents "a dangerous moment for the mission," Luciano Iess, Cassini team member at Italy's Sapienza University of Rome, said at a meeting of the European Geosciences Union in Vienna.

Skimming Saturn at an altitude of about 1,800 miles (3,000 kilometers), the spacecraft will be closer than ever to the band of ice and space rocks that circle Saturn.

The rings around Saturn - a gas giant that is second in size in our solar system only to Jupiter - are thousands of miles (kilometers) wide, but only 30 to 300 feet (nine to 90 meters) deep.

The spacecraft's final dives aim to offer a fresh look at the rings, potentially revealing more about their mass and whether they are old or new.

"If the rings are massive, this means that they are old. They can date back to the formation of the Saturnian system," Iess said.

"If the mass is small, then the rings are young and they have been formed by a different process."

Some scientists believe that rings could have formed after asteroids smashed into some of Saturn's moons, creating a trail of debris.

Saturn has more than 60 moons, and Cassini has made new discoveries on some of them, which may have conditions suitable for a form of life.

The flyby should also provide more information about the interior of Saturn.

"We hope to get a measurement of the core mass, how many heavy elements are concentrated in the interior of Saturn," said Iess.

Cassini dropped a European probe on Saturn's massive moon Titan and revealed its surface of methane liquid seas, including a complex system of methane rain and runoff.

It discovered that the icy moon Enceladus conceals a subsurface, salty ocean beneath its crust, and may be able to support living microbes.

Cassini also observed storms, lightning and clouds around Saturn for the first time.

Cassini has made "a wealth of discoveries," said Nicolas Altobelli, Cassiniproject scientist with the European Space Agency.

"We will have to rewrite many textbooks on planetary science."