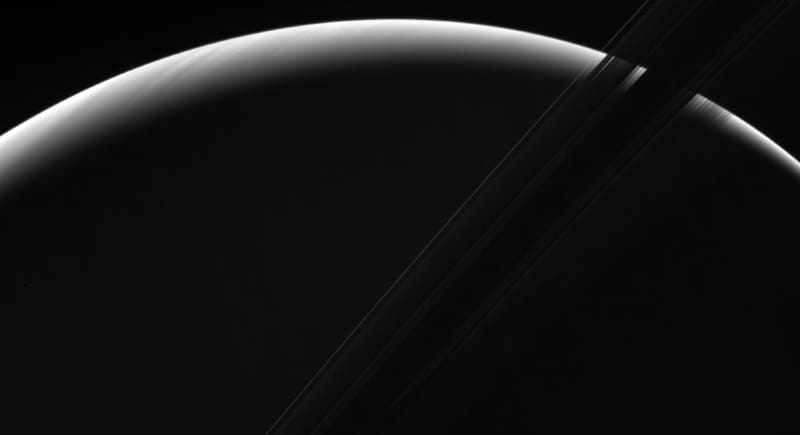 NASA's Cassini spacecraft has beamed back a stunning image that shows a sliver of Saturn's sunlit atmosphere with its icy rings stretched across the foreground as a dark band.

The Cassini mission is currently executing a series of daring ring-grazing dives as the mission comes closer to the culmination of its epic 20-year-long journey in space. The new image captures the un-illuminated side of the rings from about seven degrees below the ring plane.

The image was taken in green light with the Cassini spacecraft wide-angle camera on March 31. The view was obtained at a distance of about one million kilometres from Saturn.

After executing 22 dives between the planet's icy rings, the spacecraft will plunge into Saturn's atmosphere.

The finale orbits bring the spacecraft closer to Saturn than ever before, providing stunning, high-resolution images and new insights into the planet's interior structure and the origins of the rings, NASA said.

During its final plunge into Saturn on September 15, Cassini will send data about the atmosphere's composition until its signal is lost.

Earlier this week, NASA revealed its Opportunity Mars rover is examining the edge of a crater on the red planet that may once have been a lake of liquid water.

The Opportunity rover found rocks at the edge of Endeavour Crater that were either transported by a flood or eroded in place by wind.

The features were seen just outside the crater rim's crest above "Perseverance Valley," which is carved into the inner slope of the rim.

OnePlus 3, 3T to Get Android O Before the End of 2017, and More Revealed at Reddit AMA
Samsung Galaxy Note 7 Refurbished Units to Start Selling Next Week: Reports