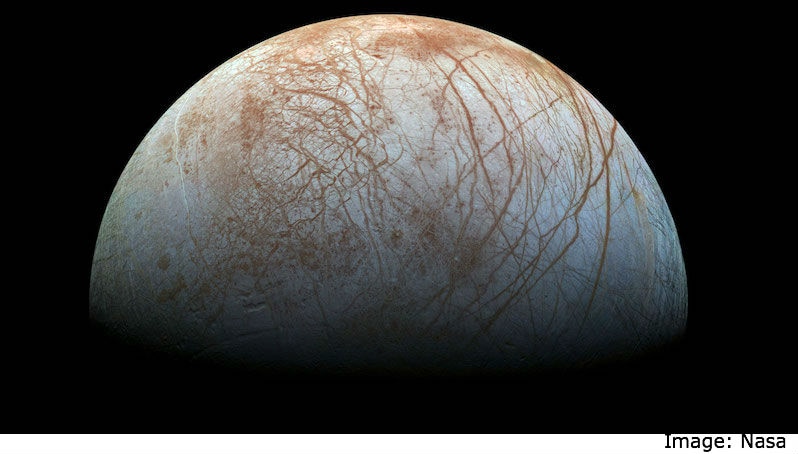 After claiming that Jupiter's moon Europa has strong evidence for an ocean of liquid water beneath its crust which could host conditions favourable for life, the US space agency is set to announce a "surprise finding".

At 2pm EDT (11.30pm IST) on Monday, astronomers will present results from a unique Europa observing campaign that resulted in surprising evidence of activity that may be related to the presence of a subsurface ocean on Europa.

The announcement will be made in the presence of Paul Hertz, Nasa's Director of astrophysics and William Sparks, astronomer with the Space Telescope Science Institute in Baltimore.

After journeying for nearly five years to our solar system's largest planet, Nasa's Juno spacecraft has sent back the first images of Jupiter's north pole and the the auroras rippling across its southern pole.

The images were taken during the spacecraft's first flyby of the planet with its instruments switched on.

Juno successfully executed the first of 36 orbital flybys on August 27 when the spacecraft came about 4,200 km above Jupiter's swirling clouds.

The images show storm systems and weather activity unlike anything previously seen on any of our solar system's gas-giant planets, Nasa said.

"First glimpse of Jupiter's north pole, and it looks like nothing we have seen or imagined before," said Scott Bolton, Principal Investigator of Juno from the Southwest Research Institute in San Antonio.

"It's bluer in colour up there than other parts of the planet, and there are a lot of storms," Bolton noted.

Along with JunoCam snapping pictures during the flyby, all eight of Juno's science instruments were energised and collecting data.

The Jovian Infrared Auroral Mapper (JIRAM), supplied by the Italian Space Agency, acquired some remarkable images of Jupiter at its north and south polar regions in infrared wavelengths.

The Juno spacecraft was launched on August 5, 2011 from Cape Canaveral, Florida and arrived at Jupiter on July 4, 2016.

Nasa announced last year that it intends to send a robotic spacecraft, equipped with a suite of scientific instruments, to circle Europa in the 2020s.

Samsung Galaxy On8 to Launch Soon in India, Exclusively on Flipkart