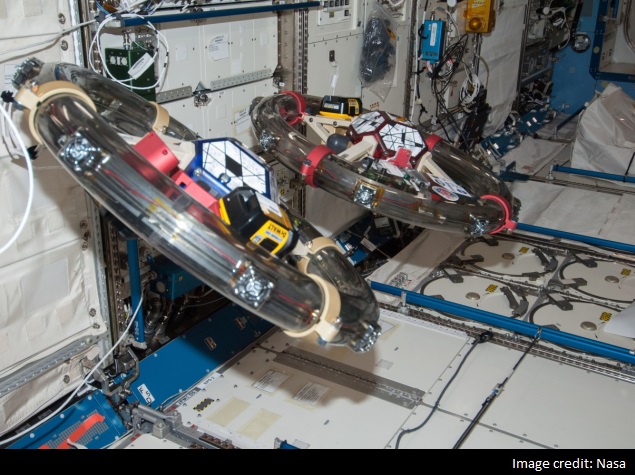 Google smartphones with next-generation 3D sensing technology are about to blast into orbit, where they will become the brains and eyes of ball-shaped hovering robots on the International Space Station.

Nasa plans to use the handsets to beef up its Synchronized Position Hold, Engage, Reorient, Experimental Satellites, or SPHERES, which could eventually take over daily chores for astronauts or even handle risky duties outside of the vessel.

The phones, part of Google's Project Tango augmented reality initiative, will be aboard a cargo spacecraft scheduled to launch on July 11.

Inspired by a scene from the movie Star Wars where Luke Skywalker spars with a hovering globe, the soccer-ball sized robots can be guided around the space station's microgravity interior, propelled by tiny blasts of CO2 at about an inch per second.

When Nasa sent its SPHERES to the space station in 2006 they were capable of precise movement but little else. In 2010, engineers at Nasa's Ames Research Center in Mountain View, California, looked for ways to make the devices smarter.

"We wanted to add communication, a camera, increase the processing capability, accelerometers and other sensors. As we were scratching our heads thinking about what to do, we realized the answer was in our hands," Smart SPHERES project manager Chris Provencher told Reuters in an interview last week. "Let's just use smartphones."

They bought phones at Best Buy and altered them by adding extra batteries and a shatter-proof displays before sending the handsets to the space station, where astronauts used Velcro to attach them to the side of the SPHERES. That gave the robots a wealth of new sensing and visual capabilities - but still not enough to move around the station as easily as the engineers wanted.

Looking to improve the robots, Nasa recently turned to the experimental smartphones Google created to encourage innovation in its push for consumer mobile devices that can make sense of space as easily as people do.

The Project Tango handsets include a motion-tracking camera and an infrared depth sensor similar to Microsoft's Kinect add-on for the Xbox. The sensors will detect sharp angles inside the space station and create a 3D map that lets the SPHERES navigate from one module to another.

"This type of capability is exactly what we need for a robot that's going to do tasks anywhere inside the space station," Provencher said. "It has to have a very robust navigation system."

Nasa's phones have been split open so that the touchscreen and sensors face outward when mounted on the robots. They also include space-tested batteries and plastic connectors to replace the Velcro.

It also teamed up with LG recently to launch a Project Tango tablet to encourage developers to experiment with its features.