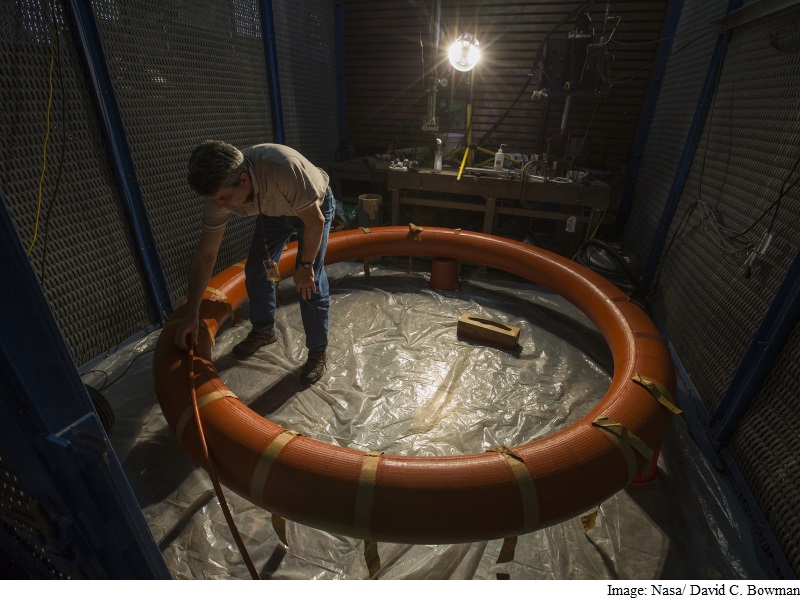 To slow down a spacecraft as it descends and lands on a distant planet on deeper space mission including Mars, Nasa engineers are testing inflatable heat shield technology at the US space agency's Langley Research Centre in Hampton, Virginia.

Engineers recently put the technology to the test by packing a nine-foot diameter donut-shaped test article - also known as a torus - to simulate what would happen before a space mission.

Called the Hypersonic Inflatable Aerodynamic Decelerator (HIAD), it works like a parachute, using the drag of a planet's atmosphere to slow the space vehicle as it descends toward the surface.

Slowing the spacecraft protects it from the intense heat of atmospheric entry and allows it to land more softly.

The technology will enable the delivery of heavy cargo, science instruments and people to other worlds.

It could also be used to retrieve cargo from the International Space Station (ISS) and return it to Earth.

"During testing, we used a vacuum pump to compress the test article into a small space," said Keith Johnson, a lead engineer for the project in a statement.

"We packed and unpacked it and did thorough inspections to check for leaks and damage to the Zylon and Teflon materials. We repeated this three times," he added.

According to test engineer Sean Hancock, HIAD was packed the same way each time to see how the material would handle folding, packing, and compressing.

Doing so helps engineers understand how it would perform after exposure to handling, storage and deployment during a space flight mission.

"The test included all the components for the latest inflatable torus design, so it was a good final check to prove that the materials can tolerate packing," Johnson added.

After the successful testing, Nasa engineers can move forward in the development of creating a larger HIAD that can withstand the stress of being tightly packed in a rocket and the high temperatures experienced when it descends through the atmosphere of a planet such as Mars.

"In the end, we'll have a complete system that will be tested to show that it can meet the requirements for a space flight mission whether it's going to be returning a vehicle to Earth or future Mars missions," Johnson noted.