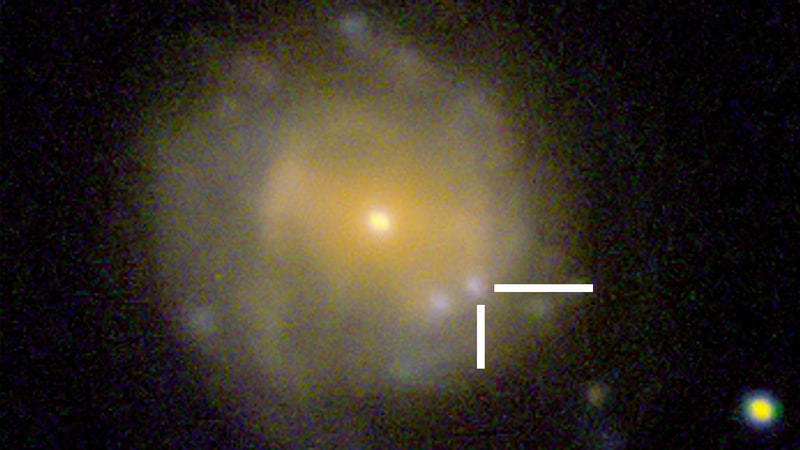 An international team of astronomers, using NASA telescopes, have captured the first ever image of a star that collapsed to form a compact object, and are debating whether it is a black hole or a neutron star.

NASA's Asteroid Terrestrial-impact Last Alert System telescope in Hawaii picked up a brief and unusual burst in the night sky on June 16, 2018, the US space agency said in a statement.

The celestial outburst -called AT2018cow and nicknamed "the Cow" - occurred inside or near a star-forming galaxy known as CGCG 137-068, located about 200 million light-years away in the constellation Hercules.

For over three days, the Cow produced a sudden explosion of light at least 10 times brighter than a typical supernova, and then it faded over the next few months, NASA said.

The stellar debris, approaching and swirling around the object's event horizon, caused the remarkably bright glow.

Using data from multiple NASA missions, including the Neil Gehrels Swift Observatory and the Nuclear Spectroscopic Telescope Array (NuSTAR), a team of scientists speculate that the Cow is a monster black hole shredding a passing star.

In a paper forthcoming in the journal Monthly Notices of the Royal Astronomical Society, they say that the shredded star was a white dwarf - a hot, roughly Earth-sized stellar remnant marking the final state of stars like our Sun.

"The Cow produced a large cloud of debris in a very short time," said Paul Kuin, an astrophysicist at University College London (UCL).

"Shredding a bigger star to produce a cloud like this would take a bigger black hole, result in a slower brightness increase and take longer for the debris to be consumed."

Another team of scientists, analysing data from multiple observatories, including NASA's NuSTAR, ESA's (the European Space Agency's) XMM-Newton and INTEGRAL satellites, and the National Science Foundation's Very Large Array, claimed that it is a supernova -- a stellar explosion -- could be the source of the Cow.

"We saw features in the Cow that we have never seen before in a transient, or rapidly changing object," said Raffaella Margutti, an astrophysicist at Northwestern University in Evanston, Illinois.

In the study, forthcoming in The Astrophysical Journal, they propose that the bright optical and ultraviolet flash from the Cow signalled a supernova and that the X-ray emissions that followed shortly after the outburst arose from gas radiating energy as it fell onto a compact object.