Quasars are distant objects that shine so brightly that they eclipse the galaxies that contain them. 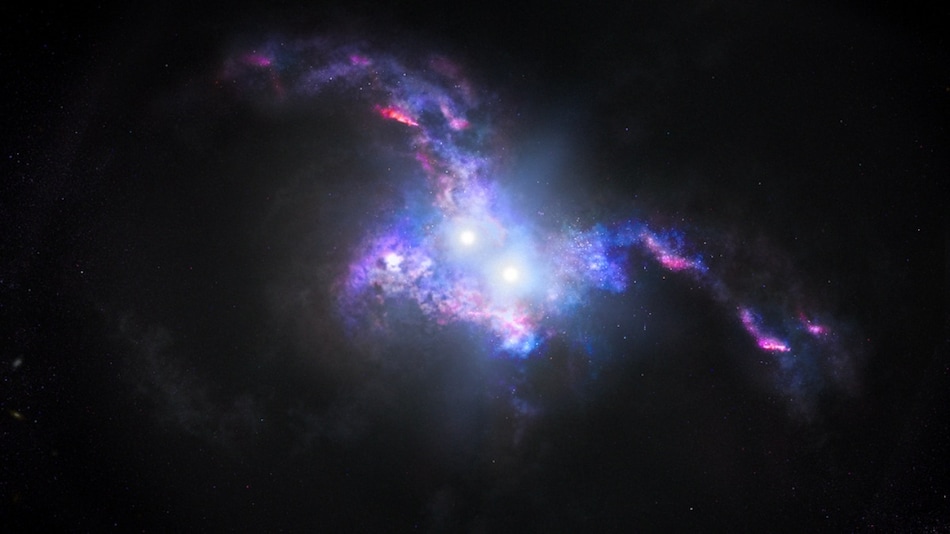 Hubble captured an image of the two quasars merging

NASA has shared an image that shows two stunningly luminous centres of light surrounded by what appears to be waves of gases let loose in the sky. NASA said the two lights are recently discovered quasars that appear to be merging into a single object. Quasars are distant objects that shine so brightly that they eclipse the galaxies that contain them. They are powered by black holes that are a billion times more massive than our Sun. Astronomers have long been fascinated by these powerful dynamos.

Quasars, which play an important role in galaxy formation, got their name because they appeared like stars when they were first noticed in the 1950s and 1960s. But they aren't stars. They are still bright — up to 1,000 times brighter than our Milky Way galaxy. And hence, they are also highly active and emit massive amounts of radiation across the entire electromagnetic spectrum.

NASA said scientists found the new pair of quasars using the ageing Hubble Space Telescope, which will soon be replaced by James Webb Space Telescope. The two illuminating dots in the image shared by NASA are separated by 10,000 light-years. But when their galaxies merge, they will create an even more massive black hole.

“Astronomers using NASA Hubble recently discovered two quasars that look to be merging into a single object. Astronomers believe that the quasars, which are beacons of light believed to be powered by supermassive black holes, are the cores of two massive colliding galaxies,” the agency said.

Scientists hope that studying these two quasars will allow them to understand how galaxies and black holes develop together. Studying quasars can also be helpful in understanding the early stages of the universe. Despite emitting enormous amounts of light, they are not visible from Earth with the naked eye because of their great distance from here. In fact, energy from quasars takes billions of years to reach the Earth's atmosphere.