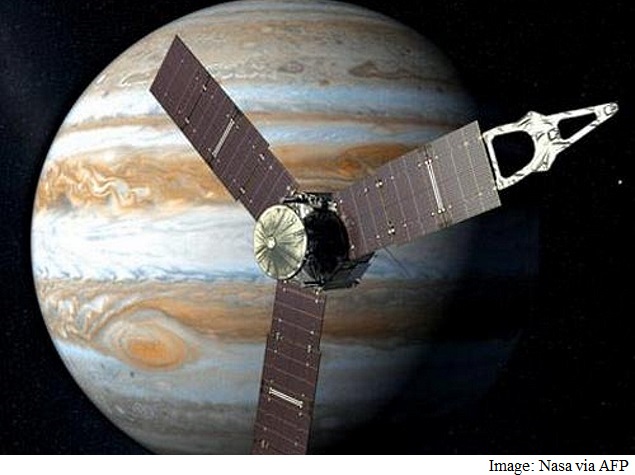 Jupiter's largest moon, Ganymede, has an underground ocean that contains more water than Earth's, broadening the hunt for places in the solar system where life might be able to exist.

Researchers said Thursday that aurorae glimpsed by the Hubble Space Telescope helped confirm the long-suspected subsurface saltwater on Ganymede, the largest moon in the solar system.

The Galileo spacecraft, which arrived at Jupiter in 1995, had already detected a possible magnetic field on Ganymede.

The Hubble Space Telescope confirmed that discovery by observing changes in the aurorae around the celestial body.

"Since the 1970s, there were speculations and models that Ganymede could possess an ocean," said Joachim Saur of the University of Cologne in Germany.

"We do not have these ambiguities anymore," he told reporters.

The latest findings from Hubble "provide the best evidence to date for the existence of an ocean on Ganymede."

Aurorae, which Nasa describes as "ribbons of glowing, hot electrified gas" can be seen in regions around the north and south poles of the moon.

Because aurorae are controlled by a moon or a planet's magnetic field, observing changes in their behavior can lead to better understanding of what exists under the crust.

Researchers found that Jupiter's own magnetic field interacts with Ganymede's, causing a rocking motion in the aurorae. This motion is reduced by magnetic friction applied by the presence of Ganymede's underground ocean.

Heidi Hammel, executive vice president of the Association of Universities for Research in Astronomy, said the approach showed that a space telescope could be "a powerful tool" to make inferences about the interior of a moon.

Already, scientists know there are oceans beneath surfaces of Jupiter's moon Europa and Saturn's moon Enceladus. Jupiter's moon Callisto is believed to have subterranean water as well.

"Every mission that we send to various places in the solar system is just taking us one step further to finding that truly habitable environment - a water-rich environment in our solar system," said Hammel.

Now, much more can be learned about the conditions on Ganymede - which is larger than the planet Mercury - when a European Space Agency mission, called Jupiter's Icy Moons Explorer (JUICE) launches in 2022 and arrives at Jupiter in 2030, she added.

"Hubble observations have now confirmed the presence of a salty, electrically conducting ocean under the crust of Ganymede, and so when the JUICE mission ultimately goes into orbit around Ganymede it will have a very, very rich and exciting science mission," Hammel said.

Much remains to be learned about the temperature and depth of Ganymede's ocean.

As of now, scientists estimate the ocean is 10 times deeper than Earth's oceans and is buried under a 95-mile (150-kilometer) crust made up of mostly ice.

As to the water temperature, they only know it is warm enough to be liquid, said Saur.

Jupiter is a gas giant, composed mainly of hydrogen and helium, and is the largest planet in the solar system.

Its four largest moons, Ganymede, Io, Europa and Callisto, can be seen with binoculars on a clear night.

IBM Said to Be Looking at Adopting Bitcoin Tech For Major Currencies
HTC One M9 to Launch Monday; 64GB Storage Variant Tipped Alongside