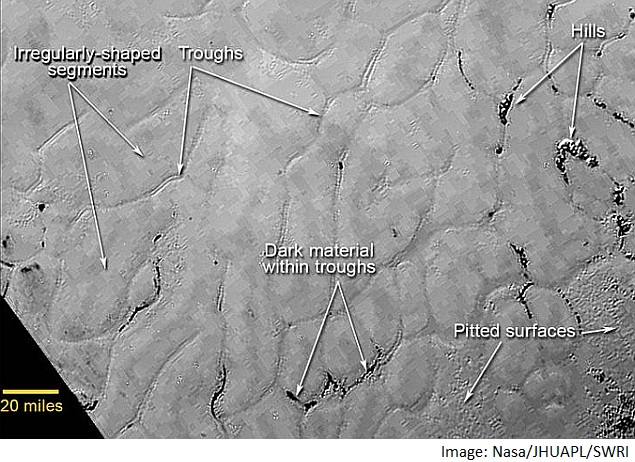 Smooth, icy plains have been spotted on the surface of Pluto, in the latest images released Friday from a Nasa spacecraft that flew by the dwarf planet this week.

The plains are located north of Pluto's icy mountains, in the center-left of the heart shape that Nasa has named "Tombaugh Regio," or the Tombaugh Region after Clyde Tombaugh, who discovered Pluto in 1930.

The area is lined with troughs that resemble frozen mud cracks on Earth.

There are no apparent craters, despite Pluto being in the Kuiper Belt, which scientists have described as a shooting gallery of cosmic debris.

Nasa says the plain is no more than 100 million years old, and that Pluto is still being shaped by active geological processes.

But just what those processes are remains a mystery.

"This terrain is not easy to explain," said Jeff Moore, leader of the New Horizons Geology, Geophysics and Imaging Team at Nasa's Ames Research Center in Moffett Field, California.

There are two theories being considered. Perhaps the plains were shaped by the contraction of surface materials, similar to what happens when mud dries, said Nasa.

Or, they could be formed by a process called convection, where by some kind of heat from Pluto's interior reshapes the surface layer of frozen carbon monoxide, methane and nitrogen.

"These are the early days of a close encounter analysis," said Moore.

"As extraordinary and provocative as these images are, we are in the most preliminary stages of our investigations. We are still entertaining the widest range of hypotheses. We are acutely aware that jumping to conclusions leads to great peril."

Nasa's New Horizons spacecraft zipped by Pluto on Tuesday, marking the first time in history that humankind has explored the distant dwarf planet.

The nuclear-powered spaceship traveled for nearly 10 years and three billion (4.8 billion kilometers) to reach Pluto, and now it is moving deeper into the Kuiper Belt region of space.

Uber vs de Blasio in Fight Over Access to New York Streets
Xolo Black Review: Back in Black